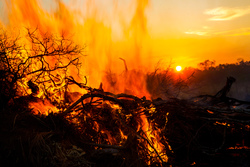 New data on land fires in Bolivia indicates that the surge in illegal forest conversion for large-scale commercial agriculture and cattle ranching seen since 2012 is accelerating. But despite this rapidly deteriorating situation, deforestation in Bolivia continues to receive scant international attention.

ABT found that 70% of this illegal deforestation is occurring in the department of Santa Cruz, which is the ‘powerhouse’ of Bolivian agriculture and increasingly viewed as the next agricultural frontier of Latin America. Huge investment is pouring into Santa Cruz from Brazil and Argentina, where suitable land for soy expansion is increasingly hard to find.

Recently released data on land fires suggests that illegal deforestation has accelerated even more quickly in 2016. Fire is commonly used to clear land for cattle and crops in Bolivia, a practice known as chaqueo. Between January and August 2016, the last period for which data is available, 52,056 fires were recorded by ABT, a four-fold increase over the same period in 2015. The fires, concentrated in Santa Cruz and neighbouring Beni, are the worst seen in a decade. Half of the fires were attributed by the authorities to cattle-ranching, 7 per cent to crop production and a further 15 per cent to a mixture of the two.

The illegal deforestation epidemic is happening in the context of a massive contradiction between the government’s policies on forest protection and agricultural development. Despite having committed to protecting its remaining forest through its Mother Earth Law, the Bolivian government has also set aggressive targets for the expansion of export-oriented agriculture. The aim is to expand the agricultural frontier by 10 million hectares (an area the size of South Korea) between 2013 and 2025, and increase agricultural and cattle production four-fold. It seems highly implausible that Bolivia could achieve these targets without them coming at the expense of natural forests and indigenous lands.

There is a danger that this contradiction and the illegalities stemming from it will be addressed through amnesties and cuts to forest protection rules, rather than enforcement. Already in 2013 the Bolivian government—under pressure from the agribusiness lobby—passed a land use law enabling landowners who illegally deforested land prior to 2011 to pay nominal fines in order to legalize their farms. Studies have found that amnesties such as this and earlier ones have tended to accelerate deforestation. Pablo Solón, from Fundación Solon, also believes that recent amnesties for illegal fires are contributing to the worsening situation. Meanwhile in a report on its 2016 activities, ABT admits that one of the biggest threats faced by the agency is political interference and pressure from the agribusiness and timber sectors, as well as attacks against staff. A leading Bolivian research NGO, CEDIB, known for its critiques of the government’s extractivist policies, has faced similar pressures in recent months.

A recent investigation by US NGO Mighty Earth (which did not examine legality) documented numerous ongoing instances of deforestation for industrial soy planting in Bolivia’s Santa Cruz province, finding “massive, out-of-control fires raging through the landscape”. The research uncovered ties to Burger King via the international agri-business giants Cargill and Archer Daniels Midland. Such exposure is a rarity, however. Despite being one of the top five countries in the world for recent tropical deforestation, Bolivia has gained very little attention within international forest policy circles.

Three-quarters of Bolivia’s soy production is exported. Until recently, nearly all beef production was consumed domestically, but controls on beef exports are gradually being relaxed, paving the way for a rapid expansion in export-oriented ranching.

In addition to soy planting and cattle ranching, extensive sugarcane development is also contributing to the surge in deforestation in the country. Six hundred hectares were cleared in just 3 months in late 2016 in dense natural forests around the San Buenaventura sugar mill in north-west Bolivia. The Tacana indigenous community alleges that it was forced to concede 4000 hectares of its ancestral territory to make way for the mill.