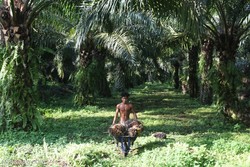 A worker on an oil palm plantation on Indonesia’s main western island of Sumatra. As the industry runs out of land in the country’s western and central regions, it is increasingly expanding eastward into Papua. (Photo by Rhett A. Butler for Mongabay)
Mongabay | 14 April 2017

by Alice Cuddy
The world’s flagship certification body for the palm oil sector is undermining its own standards for plantation developments, according to a group of leading environmental and indigenous rights NGOs, who say the value of the organization is increasingly in question.
Greenpeace, the Environmental Investigation Agency (EIA), Pusaka and the Forest Peoples Programme have criticized the Roundtable on Sustainable Palm Oil (RSPO) for allowing a member to post public notification of new planting plans, despite knowing it hadn’t met the required standards set by the body.
New Planting Procedure (NPP) documents submitted by PT Nabire Baru, a subsidiary of Singapore-based palm oil company Goodhope Asia Holdings, for plantation development in West Papua are “incomplete, substandard, insufficient, and in places factually untrue,” the coalition say.
Among issues reportedly highlighted by the NPP documents are extensive illegal development and ongoing non-compliance with RSPO rules.
The issues highlight “failings by the certification body BSI which approved sub-standard NPP documents for submission to the RSPO, and the subsequent failings of the RSPO Secretariat to prevent the publication of the NPP notification on its website,” the NGOs said in a recent letter to the RSPO’s Board of Governors.
Goodhope, an arm of Sri Lanka’s Carson Cumberbatch, has already been linked to environmental and human rights abuses in Indonesia, including complaints last year that Nabire Baru grabbed land from an indigenous community in Papua.
The NGOs say the NPP submission sheds light on “fundamental failings” within an organization created to promote sustainability in an industry dogged by such issues, and are calling for “robust” action against the Secretariat, which handles the day-to-day running of the RSPO.
The RSPO confirmed to Mongabay that its Secretariat commissioned an independent review of Nabire Baru’s NPP submission before it was published. The review found that its High Conservation Value assessment, required under RSPO rules, was “unsatisfactory” and should be re-done. The assessment was carried out by a team of Bogor Agricultural University lecturers led by Nyoto Santoso, whose RSPO audits have been repeatedly exposed as filled with misleading claims.
However, despite its findings, the RSPO said it agreed to requests from Nabire Baru to post the NPP documents on its website.
“This is in the right of the company,” said RSPO communications chief Stefano Savi.
He added that the notification allows stakeholders to provide comments for 30 days after its publication, which in turn “helps the RSPO to gain more information and better understand the situation on the ground.”
Greenpeace forests campaigner Richard George urged the RSPO’s Board of Governors to “investigate, publish its secret dossier on Goodhope and sanction the Secretariat.”
However, Savi said it was not possible to release the review due to “current procedure.”
He maintained that the RSPO’s commissioning of the unpublished review in itself shows that the organization “fulfilled its duties in checking the quality of the assessment and identifying any shortcomings.”
Edi Suhardi, Goodhope sustainability director and vice president of the RSPO, said the company was committed to meeting the necessary standards, and was beginning new independent assessments this month on its Nabire Baru concession.
He denied any allegations that his position within the RSPO could influence decisions about the NPP submission.
“To be perfectly honest, I am personally very much disappointed to know that the posting of the Goodhope NPP was only done in March 2017 or two years after its submission in 2015. This is concrete evidence that…I am incapable to influence neither process nor decision of the RSPO Executive Office,” he said by email.
The NGOs say central to the issues with Nabire Baru is the RSPO’s apparent failure to implement a resolution adopted in 2015 to ensure the “quality, oversight and credibility” of assessments.
“To date, the RSPO Secretariat has shown no coherent plan for the implementation of Resolution 6h, while simultaneously pursuing the roll-out of policies and standards that cement many of the problems Resolution 6h was intended to resolve,” the groups said in the letter.
The RSPO said it was making progress with this, and would be sharing updates soon, but the coalition warned that without serious action the organization’s future could be at risk.
“We are increasingly of the opinion that RSPO is in danger of losing the limited support it enjoys, due to the increasing evidence of the unreliability of RSPO certification,” they warned the Board of Governors.
“We consider the debacle surrounding the NPP at [Nabire Baru] to be symptomatic of the problems undermining the RSPO.”