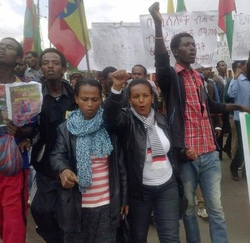 Ethnic Oromo students rally together as they demand the end of foreign land grabs marching with placards on the streets of Addis Ababa, Ethiopia in 2014. (Photo: FlickrCC)
Women News Network | 5 April 2017

by Lys Anzia
She spoke to me with tears in her eyes describing the calculated execution of her own people. Even though Atsede Kazachew feels relatively safe as an Ethnic Amharic Ethiopian woman living inside the United States, she is grieving for all her fellow ethnic Ethiopians both Amharic and Omoro who have been mercilessly killed inside her own country.
“There is no one in the United States who understands,” outlined Atsede. “Why? Why?” she asked as her shaking hands were brought close to her face to hide her eyes.
The Irreecha Holy Festival is a hallowed annual celebration for North East Africa’s largest ethnic group, the Oromo people. Bringing together what has been counted as up to two million people, who live near and far away from the city of Bishoftu, the Irreecha Festival is a annual gathering of spiritual, social and religious significance. It is also a time to appreciate life itself as well as a celebration for the upcoming harvest in the rural regions.
Tragically on Sunday October 2, 2016 the event ended in what Ethiopia’s government said was 55 deaths but what locals described as up to 700 deaths and casualties.
“The Ethiopian government is engaged in its bloodiest crackdown in a decade, but the scale of this crisis has barely registered internationally…,” outlined UK Director of Human Rights Watch (HRW) David Mepham in a June 16, 2016 media release published by the International Business Times.
“For the past seven months, security forces have fired live ammunition into crowds and carried out summary executions…,” added Mepham.
So what has the U.S. been doing about the present crisis situation in Ethiopia?