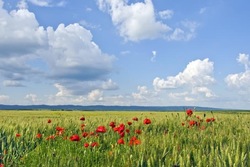 Arabs eyeing 20,000 hectares of land in Serbia
Al Dahra plans to allocate millions of dollars this year to improve food safety. In Serbia alone they want to buy as many as 20,000 hectares of land.
The Arabs plan to spend about 130 million this year to buy arable land around the world and invest in projects that ensure greater food safety, according to Al Dahra's Managing Director Khadim Al Darei.
Al Dahra is a company specialized in the growing, production and marketing of food products. It is well known to the Serbian public, and according to the manager, plans to extend the long-term partnership with this country.
As he said, the company already has 1,000 hectares of land in Serbia and plans to buy more, as the goal is 20,000 hectares.
"We will allocate nearly USD 130 million to lease and acquire ownership of land," Al Darei said at the World Forum for Innovations in Agriculture, that gathered over 300 companies from all over the world.
Al Darei added that the company is making good progress in Egypt, where it owns more than 54,000 hectares. In addition to Egypt and Serbia, the company has 4,000 hectares in the United States and Spain each, and about 2,000 in Australia.