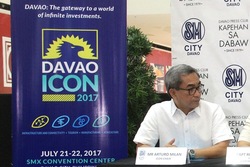 by EARL O. CONDEZA
DAVAO ICON 2017. Arturo Milan, chairman of the Davao City Chamber of Commerce and Industry Inc. is expecting more investors will join the Davao Investment Conference this year as the President’s hometown attracts more investors (Earl O. Condeza/davaotoday.com)
DAVAO CITY, Philippines – The upcoming investment conference of the business sector this year has included agribusiness in the priority sectors for investments that will provide more job opportunities.
Arturo Milan, ​board of trustee of the Davao City Chamber of Commerce and Industry Inc. and the head of Davao ICON 2017 said agribusiness ventures “could generate a lot of employment in upland areas where poverty is at its highest.”
“To provide job opportunities to upland people by inviting large​ ​scale investment in agriculture,” Milan said.
Palm oil, rubber, cacao, and coffee were among the farm products that would be sought ​by investors, he said. Their target farmland will be in Paquibato and Marilog districts of the city.
Milan​ ​said that farmers ​in these areas were granted lands but they were forced to sell these lands for they could not make it productive.
“The problem is that they do not have the capital, the government provided land and you know th​e​s​e​ are marginal farmers, they don’t even have the means to eat ​three​ times a day, so how can they invest in the land to make it productive if there’s no capital,” he said.
Milan said they adopted 500 hectares​ ​of land in Marilog for the DCCCII’s tree planting activity, ​using fruit trees, but residents only sold their lands.
“The problem is when the trees were already productive, there​ are​ already value to the area, they start selling ​to ​resident​s​ from downtown who ha​ve​ the money because they convert it into their own farming area, ​T​hat’s sad,” he said.
Milan said that “farmers need money also.”
However, peasant leader Pedro Arnado, spokesperson of Kilusang Magbubukid ng Pilipinas Southern Mindanao, said the approach on helping the farmers is wrong.
“The farm crops were right, but their approach is wrong,” he said. “It will just worsen the situation of farmers.”
“The monopoly [of product price] will worsen as they [farmers] could not decide on the pricing,” he said.
Arnado said that the price of the products will be decided by the ​”​national compradors​”​ and not by the farmers.
For global export, Arnado said the country’s commerce “could just demand for a higher price of the products to help the farmers, but they did not.”
​He described as “old story”the ​claim that more jobs would be created once the investors establish agribusiness here.​
“The farmers already knew that, the government should instead work on the distribution of lands to the farmers and provide assistance to their farm inputs,” he said.
Arnado added that the farmers in Paquibato and Marilog districts already knew of this government plan to transform their lands to agribusiness ventures since before President Duterte came to office.
“The 35,000 hectares for palm oil plantation there was resisted by the lumad and farmers,” he said.
“It was not fulfilled but we never knew that it will be brought back,” he added.
The Davao ICON 2017 will be happening on July 20-22, this year and will be hosted by the city of Davao. Inviting different investors from Japan, China, and Korea.
Last month, Australia already show​ed​ its interest of investing in the city after having a meeting with the DCCC with its economic team.