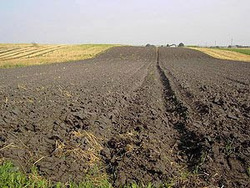 Russia's farmland market remains attractive to investors, both foreign and domestic, despite the apparent snub presented by Black Earth Farming's decision to quit, with prices soaring by up to 60% last year.

While Stockholm-listed Black Earth Farming, which at its peak controlled some 330,000 hectares of Russian farmland, revealed this week it was selling out to Russia's Kukura family, that does not reflect a broader lack of confidence in the market, said Andrey Sizov Jr, managing director at SovEcon.

But what is more apparent now than in the last decade, when European-based groups such as Black Earth Farming, Landkom International and Trigon Agri were snapping up land in the former Soviet Union, is the switch in interest away from Western investors.

"We do see a lot of foreign interest, but from different countries, not from the West," Mr Sizov said.

Leading sources of investment included Asia and the Gulf - whose appetite for control of agricultural production in the face of limited domestic sources has been noted worldwide.

Their quest for deals has expanded beyond farmland into broader farm output, with Mubalada Development Company, the United Arab Emirates-backed sovereign wealth company, for instance, in talks over a deal which will see 89bn roubles invested in AFG National, Russia's top rice company.

Last June, Moscow and Beijing officials agreed on plans for a $1.1bn investment in infrastructure, including one terminal and 29 elevators, with capacity for up to 8m tonnes of grain, to support crop exports from Russia to China, although there are doubts as to whether the project will succeed.

Meanwhile, buyers from Vietnam, Thailand and Turkey are also being seen increasingly in the Russian land market.

And this on top of the domestic buyers, such as the Kukuras, and the family offices which have emerged as Russia's billionaires have become more sophisticated investors.

Some large companies have also expanded into agriculture – most famously the Sistema conglomerate controlled by Russian oligarch Vladimir Yevtushenkov, which is best known as mobile phone operator but now claims an agricultural landbank of 250,000 hectares.

The agricultural interests are split between Sistema's own grain, vegetable, fruit and dairy operations and the RZ Agro farming joint venture in southern Russia with members of the Louis Dreyfus family.

Investors in Russian farmland are able to exploit the increasing appeal agriculturally of a country whose growing productivity has lifted it to top rank in world wheat exports, Mr Sizov said.

"There are not many places in the world with the right climatic conditions and infrastructure, and which offer land at the kind of values seen in Russia.

"There is a productivity boom going on" in the Black Sea – a region which has become a "huge new brand in agriculture, after not existing 15-20 years ago".

But with Ukraine tricky for land buyers to invest in – the country in November renewed until 2018 a moratorium on land sale curbs dating back to 2001 - that "leaves Russia as the only easy option".

Russia's values are cheaper than those in nearby countries too, with the average price of $2,100 per hectare for land in Krasnodar, the most expensive Russian region, cheaper than the $5,800 per hectare required for farms in the likes of Romania and Lithuania, according to SovEcon.

The Russia discount comes despite a rise in prices estimated by 60% last year in southern areas such as Krasnodar, the key origin of grain for Russia's exports.

Values in the Volga region rose 25% to $1,800 per hectare, with those in the Central Black Earth area, where Black Earth Farming is based, up 16%.

Change of the guard

As to whether investors are lured by the arguments for turning to Russia, an indicator may be seen later this year, when Sistema has proposed a listing of its core agriculture division.

"We plan to carry out the next IPO either at the end of this year or at the beginning of next year of our agricultural holding… because we think that it has been developing very fast," Mr Yevtushenkov said last month, flagging the potential for more acquisitions in farming too.

Just as one listed farm operator in Russia is quitting, another appears to be on the way.