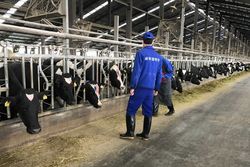 New Hope Dairy is one of the largest supplies of meat, egg and dairy product in China. Photo: ABC News/Pip Courtney

Chinese investment in Australian agriculture is usually a magnet for controversy, but one Chinese company has remained immune from criticism, with plans to invest $1 billion by the end of the decade.

New Hope Group's Australian chief executive officer Nick Dowling said he suspected the company had flown under the radar because it did not buy land and assets outright, preferring to invest in local companies.

"We look to work with great partners that have great businesses where we can bring our resources and market access to give life to opportunities that business wouldn't otherwise have.

"It's all about giving oxygen for those businesses to grow."

Mr Dowling said the group had not closed its chequebook yet and was looking for further investments in premium food operations from lamb to aquaculture.

"He's quite happy to invest another billion or more into Australia in the next two or three years," Mr Dowling said.

"I don't think there's necessarily any limit to what the chairman wants to invest in, it's really about opportunity."

A sign of New Hope's long-term commitment to Australia came late last year with the opening of the company's new Australian head office in Sydney.

Mr Liu 65, is revered in China because of his extraordinary rags to riches life story.

In 1982 he and his three brothers sold a watch and a bicycle to raise the equivalent of $AU150 to grow quail.

"My parents were not officials, my relatives were not rich, so everything depends on myself, I just wanted to change myself, change my life," he said.

New Hope Group is now a global animal protein powerhouse with 70,000 employees working in 600 businesses around the world.

According to the Forbes China Rich List, Mr Liu and his family were worth $4.5 billion in 2016.

"The air and water in Australia are very good, the processing plants are more standardised, and the supervision of Australian Government is also stringent," Mr Liu said.

Mr Liu said China could not meet domestic demand for beef, mutton, and seafood and needed to look offshore.

"So we thought where could we find these resources and finally we found Australia is a nice place, then we sent a working group to investigate in Australia," he said. 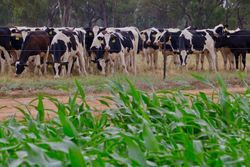 The first investment in the Kilcoy Pastoral Company (KPC), an hour north of Brisbane, has created 130 jobs.

"[The deal] has allowed us to replace older assets with newer more contemporary assets and started to pave the way for future growth," KPC chief executive officer Dean Goode said.

"For the local community it's been huge, and as the investment comes together we'll see more jobs created."

"The New Hope name's enabled us to gain access not just in China but globally to financiers, business partners or future customers or suppliers," he said.

"It's almost unbelievable to go from where Mr Liu was in 1994 to where he is today with over 70,000 employees, $15 billion in annual turnover, all from raising quails.

"It's quite extraordinary, and if that does not inspire people nothing will."

'We can take this business wherever we want'

The $100 million dairy deal came at the right time for the Moxey family, who was looking for an outside investor to expand its 3,500-cow operation at Gooloogong in central New South Wales.

"That's always the dream isn't it? — to turbo-charge your business and take it wherever you want, and we're in a situation now where we can take this business wherever we want," general manager Quentin Moxey said.

$30 million has been invested at Gooloogong in the last 12 months to buy a neighbouring farm and lift cow numbers by 2,000.

A new 24-hour dairy has been built as well as two new American-style cow barns which hold a thousand head each.

"We want to expand the scale. We want to build one, two, even more ranches," Mr Liu said.

"We have founded a joint venture company, not to purchase [it], but to cooperate and develop together."

The Moxeys produce 80 million litres of milk a year and as milk supply grows it will seek out other markets, potentially overseas.

Mr Liu said the Australian Government had been positive towards his investment ambitions.

"The Australian governments are good, they welcome Chinese and international investors as long as the investors bring benefits to Australian people, they will support," he said.

Mr Liu said he would continue with the co-investment investment model in Australia.

"I have found many investments made by Chinese enterprises in Australia, they have acquired this, or acquired that, but in this pattern, if we can develop with Australian partners, isn't it much better?

"Australians are very smart. Isn't it better for us to cooperate with them?"

Mr Dowling said the company was working with local communities to allay any doubts about Chinese investment.

"It's absolutely essential for us that we make a positive contribution to the Australian community," he said.