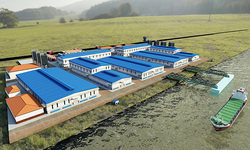 A computer graphic image of POSCO Daewoo's rice processing complex in Myanmar. Photo: POSCO Daewoo
By Jhoo Dong-chan
POSCO Daewoo is launching an agribusiness venture in Myanmar as the company's future growth engine.
According to a POSCO Daewoo official, Sunday, Korea's largest trading affiliate under POSCO group has secured construction and investment approval from the Myanmar government to build a rice processing complex (RPC) in Twante, the most accessible delta town from Yangon to reach the Irrawaddy growing region. The RPC is expected to be an all-in-one facility to dry, store, polish and test rice after harvesting. Acquiring the government's approval, POSCO Daewoo is expected to build the facility with annual rice processing capacity of 10,000 tons. A POSCO Daewoo official said it will complete construction of the facilities by 2018, aiming to become not only a rice producer but also a trader to export it to the Middle East, Africa, China and Russia. "Myanmar's investment and construction approval for the RPC facilities will allow POSCO Daewoo to secure not only infrastructure for rice production but also a global distribution network for our future operations," he said. "It will be a milestone in achieving the company's future goal to become a global grain trader with annual trading size of 10 million ton." As a part of the company's efforts to secure infrastructure for a global distribution network, POSCO Daewoo established a palm plantation in Indonesia in 2011 to launch palm oil production and export it by the end of this year while securing storage and shipping infrastructure at major ports around the world. Having put its utmost efforts into diversifying its business portfolio amid sluggish overseas trade and low commodity prices, POSCO Daewoo was selected as a preferred bidder for a natural gas-fired power plant in Myanmar in July. Since 2013, the company has also been producing natural gas in waters off the northwestern coast of the country, most of which is sold to China.