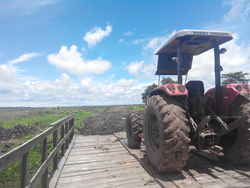 Jakarta has thrown high level support behind the Merauke Integrated Food and Energy Estate, or MIFEE, a project in the far south east of Papua province

Billed as a project to address food security concerns for parts of the country, local Papuan communities have complained that MIFEE is alienating them from their land.

"We try to empower the community to do how they can protect their own land, their own rights, from the Merauke Integrated Food and Energy Estate project."

However, the government said MIFEE was aimed at helping create improved living standards for Papuan communities.

Indonesia's President Joko Widodo has personally visited the MIFEE site as part of his campaign to foster greater economic development in Papua.

He told Tabloid Jubi that as merauke is a regency bordering a neighbournig country, PNG, it was important to work with provincial government to address the people's concerns.

Meanwhile, recently released statistics released by Indonesia's Bureau of Statistics on the ethnic composition of Papua region's population identified Merauke regency as one of five regencies with a majority of non-Papuans.

Based on the population figures from Indonesia's 2010 census, non-Papuans make up around 63 percent of Merauke's population.

"So a lot of that long-term growth will come out of West Papua," he said, "and if that continues, it will involve shifting more and more people down to that region."

Other regencies where the indigenous Melanesians make up the minority of the population include two other regencies that, like Merauke, are close to the border with PNG.

The regencies where the non-Papuan population is concentrated tend to be areas where access to health and education services is best.