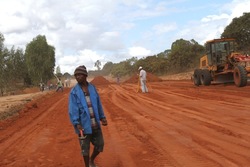 Construction of infrastructure to support large-scale agriculture is under way throughout the Nacala Corridor of northern Mozambique
Africa Japan Forum, Japan International Volunteer Center, ATTAC Japan, No to landgrab, Japan and The Concerned Citizens with Development of Mozambique-Japan | 7 December 2016 | português brasileiro  |  português moçambicano

2. The case: JICA’s attempt of silencing and intimidating peasant leaders

In light of the above evidence-based information and accounts, we strongly demand JICA and the Japanese government:

iii The report based on UNHCR, VOA and DW are posted at: http://www.mofa.go.jp/mofaj/gaiko/oda/about/shimin/page22_000146.html

iv The report based on Mozambican and International media are posted at:

vi Mr Kato confirmed this point during a conversation with a NGO representative.

vii The Mozambican embassy in Tokyo called the contact organisation for the event on 24 November 2016, telling that the attendance of the ambassador and the first secretary was already “arranged” with JICA.

viii The organisers of the public event requested re-consideration of this invitation to JICA.

ix Later the director denied that it was him who was waiting for the contact person.

x The director’s explanation during the ProSAVANA periodical dialogue at MOFA on 7 December 2016.

xvi Official answer of the cabinet office on 22 December 2016. http://www.sangiin.go.jp/japanese/joho1/kousei/syuisyo/192/syuisyo.htm