Gabon: The battle over palm oil

Gabon: The battle over palm oil 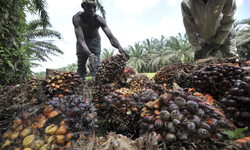 Firstly, the new Gabonese operations of agricultural trading company Olam International was heavily criticised by US environmental NGO Mighty Earth in December. Then Dimensional Fund Advisors, a big US investment firm that had previously been criticised for continuing to invest in palm oil companies, decided to divest two of its portfolios of all such assets, including equity in Wilmar International and Olam.


The campaign against palm oil could have profound implications for the sector’s development in Africa. Palm oil cultivation has become controversial because ecologically diverse areas of rainforest are often cut down to allow cultivation to take place. Huge areas of forest have been felled in Indonesia and Malaysia, affecting flora and fauna, and producing air pollution caused by forest fires when land is being cleared for palm oil plantation.

According to Friends of the Earth and numerous other environmental NGOs, palm oil plantations are the fastest growing cause of rainforest destruction and an increasingly important cause of climate change.

Palm oil produces almost quadruple oil yeild compared to sunflower or rapeseed oil, and the majority of the palm oil is produced in Indonesia and Malaysia. However, African countries have also been targeted for cultivation more recently.

Olam is a major player in the global palm oil sector and a big investor in African agri-business. The company currently sources more than 99% of its palm oil from third-party suppliers. In 2011, it set up a palm oil and rubber cultivation joint venture with the government of Gabon, with equity shared 60:40 in favour of the Singaporean firm.

The concessions in question cover 300,000 hectares, of which palm oil is being planted on 58,000 hectares covering four parcels of land: three of these are in the southwest of the country and the other in the northwest. Under a separate agreement, concluded last year, Olam has also taken a 49% stake in managing 70,000 hectares of smallholder plantations in Gabon. The two ventures involve total investment of $1.7bn.

Mighty Earth’s ‘Palm oil’s black box’ report claims that environmentally important forest areas have been cleared and the report is accompanied by video footage of tall trees being felled. A spokesperson for Mighty argued: “These forests are the last place any company should be looking to develop plantation agriculture.”

For its part, Olam argues that it promotes sustainable development, denies the allegations and states that its Gabonese plantations have created 5,400 jobs. It argues that it avoids primary rainforest and claims that 59% of the planted area comprises degraded secondary forests and the remainder savannah.

Degraded land is where the primary forest has previously been cleared. Olam chief executive Sunny Verghese said: “I want to say very categorically, we believe both these projects in Gabon in the upstream plantations are both environmentally sustainable and socially responsible.”

Olam says that it has reduced the number of third party palm oil suppliers from 48 in 2014 to 14 today as many did not conform to its sustainable practice code. However, the firm has refused to sign up to no-deforestation commitments, insisting that while this approach may be possible in Southeast Asia, there is insufficient available land in Africa to avoid forest clearance.

The government of Gabon is keen to reduce its dependence on oil exports because of falling production and lower than anticipated prices. It has responded to criticism by arguing that it has the right to exploit a proportion of its territory for farming and that it has chosen the most appropriate land for palm oil.

Whatever the rights and wrongs of Olam’s activities in Gabon, it is clear that the African continent as a whole must become more aware of the undoubted problems associated with palm oil cultivation. Governments may have to bring legislation in line with changing international opinion on the issue.

A spokesperson for the company said: “Dimensional is always looking for ways to improve the sustainability considerations for those two funds.” Apart from fund managers, pressure is also being put on the big buyers of palm oil, such as Unilever, to only purchase sustainably produced palm oil.