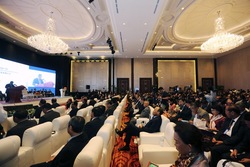 
Much of the global south – broadly comprising the continents of Asia, Africa, and Latin America – was shaped by colonialism. The so-called “great game” and the scrambles between Britain, Portugal, Belgium, France and other European states were for power, profit and – most visibly – for land.
Today, new scrambles are afoot from Brazil and Nigeria, to Ethiopia and Indonesia. Once again, land is the prize.
In the past decade, almost 50m hectares of land have been leased or bought from individuals, communities and governments in the global south for the large-scale production of biofuels, food, forest resources, industrial goods, infrastructure, tourism and livestock. A complex network of multinational companies, financial institutions and governments in the north are the key beneficiaries.
Take, for example, Feronia Inc – a company based in Canada and owned by the development finance institutions of various European governments, including the UK, France and Spain. Feronia controls 120,000 hectares of palm oil plantations in the Democratic Republic of Congo.
Some of the countries that were once colonised are now the colonisers: China and India have huge investments in Cambodia, Indonesia, Guyana, Ethiopia and Brazil among other countries.
According to the Land Matrix database, China controls 258,728 hectares in Cambodia. China’s Union Development Group (UDG) has a land concession of 45,100 hectares within Botum Sakor National Park for the development of a tourist resort. With the blessings of the central politburo of the Communist Party of China, UDG has also invested US$3.8 billion in a new deepwater port in the country, with access to 90km of coastline, on a 99-year lease. Similar investments have been made in maritime infrastructure in Pakistan, Sri Lanka, Bangladesh, Myanmar, Thailand and Indonesia. As we know, China is keen to increase its strategic and commercial influence over the South China Sea and Asian waters in general.
Sealing the deal
Land deals are implemented – and often initiated – by sub-national states which are in competition with each other to win major investments. For example, since economic liberalisation in 1991, Indian states have competed with each other – and with states in neighbouring countries such as Sri Lanka and Bangladesh, Malaysia, Vietnam, Cambodia and China – to bag business opportunities. I interviewed several senior civil servants in the southern Indian state of Tamil Nadu. On the understanding that certain details of our interviews were kept off the record, one told me:
Companies are like bridegrooms. If they are bringing an iconic brand into the state, they come with a huge list of demands, the primary one being land. In the case of [an automobile multinational], we had large, vacant plots, which we could transfer to them in a short period. In addition, they wanted road, rail and port access. They wanted to be near a metropolis. They wanted all sorts of social infrastructure, like land for an international school and sporting facilities for families of executives … Overall, there were 80-90 parameters related to land, tax concessions and clearances for water, electricity.
His colleague added:
[Companies] have played off states against each other. Take for example [a multinational]. We were trying to get them to [our state]. [They were to invest] US$2 billion … [But] the company wanted US$100m from us. [The Company’s] alternate sites were in Vietnam and Guangzhou in China. Finally Vietnam got [that] project.

The latter official hinted that governments in India and competitor countries are willing to entice companies with hard cash, tax concessions and other subsidies in order to bag their investment.
Shadowy transactions
These agreements tend to take place outside boardrooms. Deals are struck in the breakout spaces, green rooms, bars and clubs and people’s homes – in other words, in the institutional shadows. In Zimbabwe, war veterans can act as intermediaries who facilitate or block land deals at the local level, while in Cambodia and Vietnam, land investors may operate through middlemen – including moonlighting officials – in order to circumvent official rules. In India, an elaborate network of brokers, aggregators and consultants mediate between firms and governments in land acquisitions.
During fieldwork in India, I found local government land offices with six or seven workers teaming up with an army of 50-plus middlemen who sat right outside and had easy access to the officials within. These middle men look into title deeds and ownership histories for a fee and work with bureaucrats to illegally fudge and clean up land records. Middle men also peddle information about who is facing hard times and will sell land easily and who will not. They may work with land aggregators employed by big companies to put together large, commercially viable parcels of land. In a densely populated country with great pressure on natural resources this has serious social implications.
Colonial and contemporary collaborators
National and sub-national states are falling over each other to facilitate land deals in the name of attracting capital. The elites that control these states are also ensuring their longevity through the facilitation of prestigious land deals for private investors. Being pro-business is generally seen as a badge of honour and is projected as a plus point for politicians in election campaigns.
Among the more humble collaborators in the global land grab, middle men – and the shadowy institutions through which they operate – must be understood in the context of high unemployment, which make land work attractive. And, understandably, like anyone these are people with aspirations for consumption and social mobility. The flashy cell phone, the proximity to rich and powerful people, the ability to get things done, all these indications of rising status are more likely to flow on from having been involved in a successful land transaction than by sitting outside a job centre.
As we know from the history of European colonialism, the land grab would not have been possible without collaborators on the ground – local princelings and administrators were the linchpins of the colonial project. In enabling the transfer of power, they were able to enhance their own influence. Colonial-era princelings and administators have now given way to accommodating politicians, bureaucrats, middlemen and mediators of various types. As such, today’s story of globally traded land plays out along similar lines to colonial times.