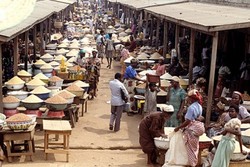 Agro-business investors assured of returns in Lagos’ N3b daily food market
By Benson Akomo
WorldStage Newsonline-- Investors willing to do business in the agric sector in Lagos State can be rest assured of a ready market and returns on investment as the daily consumption of food items in the State is worth over N3billion daily, according to the Governor, Mr Akinwunmi Ambode.
The Governor, who spoke at the maiden edition of the Lagos Food Security and Exhibition Summit with the theme "Actualizing Sustainable Food Security in Lagos State: A New, Comprehensive Agenda', said his administration was committed in its efforts towards maximising its comparative advantage in the sector to achieve food security.
He said Nigeria had no business resorting to importation to feed its citizens, adding that there was no alternative to achieving food security other than tilling the land and embrace best practices that will improve efficiency in the agricultural value chain.
He said, “Our core policy thrust towards achieving food security is to maximize the comparative advantage of the State in agriculture and establish partnerships with other States of the Federation with comparative advantage in specific areas.”
Listing some areas of collaboration already activated, Governor Ambode said his administration has sealed a landmark partnership with Kebbi State Government for the development of agricultural commodities such as rice, wheat, groundnut, onion, maize and beef value chain, expressing optimism that the partnership can result in the supply of 70 per cent of the total national rice consumption.
“We have also acquired agricultural land in other neighbouring States of Ogun and Oyo as well as Abuja. Specifically, 500 hectares of farm land has been acquired for rice cultivation in Eggua, Ogun State, 84.7 hectares at Okinni in Oshogbo for oil palm processing, among others,” the Governor said.
He said the Lagos Food Security Summit and Exhibition was organized to bring together stakeholders in the Agricultural sector to proffer solutions to the challenges militating against the achievement of food security, noting that the success recorded in the last "Traffic Summit' that has eased the traffic situation in the metropolis can be replicated in the area of food security in the state.
He therefore said that in the wake of the economic challenges facing the country there was no better time for the nation to review its approach and the redirection of its energies to food production.
“Behind every dark cloud, they say, is a silver lining. One of the challenges the current economic recession has brought to the fore is the urgent need to develop a sustainable programme that will guarantee food security for our people. As a nation, in the past, we spent billions of Foreign Exchange on importation of food and food items many of which can be cultivated in our country.
“Our country is blessed with very good arable land and a climate that supports food production. We can achieve food security and create employment opportunities for our teeming youth if we put in place the right policies and incentives that will attract significant investment into the Agricultural sector,” he said.
Also, the Special Adviser to the Governor on Food Security, Mr. Sanni Ganiyu Okanlawon, noted that that the summit was being organized to institutionalize a food security framework that would guarantee sustainable food security for its growing population.
He said the summit was designed to realign emerging realities with new global trends on food safety, food processing, food storage, food handling, funding of agribusiness and agric insurance”, adding that it will attract major stakeholders from the Agricultural sector and academia, foreign and local investors, media, civil society and policymakers in government.
Earlier, Chairman of the Summit, Alhaji Sani Dangote, commended the Governor Ambode-led administration for leading being in the forefront in addressing the challenge of food security, saying that the State boasts of a large population with an economy ranked as the fifth largest in Sub-Saharan Africa, a bulging youth population and capital of the nation’s industrial base.
He said despite the shortage of arable land in the State, the State Government can leverage on its comparative advantages to not only guarantee food security in the State, but also feed the neighbouring South West States.
He said the State has the capacity to make agriculture a profitable business, which according to him, would encourage youths to take up agriculture as a profession and contribute their quota towards achieving food security.