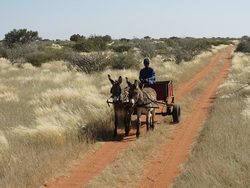 Namibia tables bill to ban foreign ownership of land - report
Windhoek – Namibia's lands minister Utoni Nujoma has reportedly tabled a bill that would see foreign nationals being barred from owning land in the southern African country.
According to eNCA the bill sought to bar foreigners from owning agricultural, commercial and communal land.
The new bill proposed a range of amendments to the Agricultural Commercial Land Reform Act of 1995 and the Communal Land Reform Act of 2002.
The minister reportedly believed that if the proposed bill could be passed without any amendments, it would be complementary to the expropriation laws gazetted by his ministry on September 1, 2016.
Foreigners in Namibia currently owned at least 281 farms which translated to 1.3 hectares, the report said.
Early this year, reports indicated that the Namibian government was planning on introducing a land expropriation bill after the country realised that the "willing buyer, willing seller" policy was "ineffective".
The announcement followed concerns raised by farmers over outdated legislation that did little to benefit them.
Statistics released by Farmer's Weekly showed that, as of last year, only 27% of the total agricultural land in Namibia had been successfully redistributed to those who were previously disadvantaged; 43% of the total agricultural land had been allocated for redistribution and another 16%, or 5.6 million hectares, had yet to be successfully redistributed.