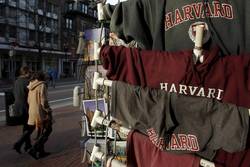 by Michael McDonald and Sabrina Willmer
Harvard University, the world’s richest school with a $35.7 billion endowment, is seeking to sell natural resources assets after the portfolio lost money last year, two people with knowledge of the matter said.
The university is looking to restructure the $4 billion of holdings to free up cash for other investments, according to one of the people, who declined to be named because the information is private. The portfolio, once considered a crown jewel in the endowment, is vast with assets including timberland plantations in Central and South America, a dairy farm in New Zealand, and vineyards in California.

Harvard Management Co., the arm of the university overseeing the endowment, confirmed plans to make changes, saying steps have been taken to improve performance including recently hiring a new managing director to oversee the portfolio.

“The team is focused on refining HMC’s natural resources strategy and streamlining assets that are concentrated across certain asset classes and geography,” Emily Guadagnoli, a spokeswoman, said in a statement.

Overhauling the portfolio would represent a significant turn and could signal attempts to simplify the endowment under a new leader who takes over next month. Harvard was viewed as a prescient investor in the late 1990s when it bought direct stakes in vast swaths of timberland in the U.S., later selling the land while diversifying into vineyards, farms and forests around the world.

“They were early adopters,” said Joshua Humphreys, president of the Croatan Institute, a social and environmental research group in Durham, North Carolina. “The skill of the managers was very high at first but everybody started playing in the space. It got very competitive.”

Returns for natural resources have suffered along with declines in commodity prices more broadly amid weakening demand from China, Brazil and other developing countries in recent years. Harvard’s portfolio lost 10.2 percent for the year ended June 30, contributing to the endowment’s 2 percent loss for fiscal 2016.

The losses were mostly attributed to two assets in South America, according to an annual report for the year ended June 30. One asset “experienced severe drought during the crop season as well as an unusually high cost of production,” while “the valuation of the second asset declined as a result of a challenging economic and political environment that made it increasingly difficult to secure financing," according to the report.

Harvard last year sold 33,600 acres of forest to Ikea Group, exiting a foray into Romanian timberland that went awry. It has also recently discussed selling some holdings from its $7 billion private equity portfolio, which includes energy investments, people have said.

Just two years ago Harvard called its natural resources portfolio performance strong, with a 10-year annual average return of 11.6 percent. Jane Mendillo, HMC’s former chief executive who left in 2014, oversaw an expansion of the portfolio, saying that having an expertise in the area could help distinguish the endowment and improve performance.

Instead Harvard’s endowment has continued to trail, with a five-year annual average return of 5.9 percent through June versus rival Yale University’s 10.3 percent.

“There was a gold rush mentality,” said Hakan Ekstrom, president of Wood Resources International, a global forest market analyst based near Seattle. “Everybody that could wanted to get into it because there were amazing returns and not a lot of risk.”

Next month, the endowment’s new CEO, N.P. ‘Narv’ Narvekar, will take office. Formerly head of Columbia University’s top-performing endowment, he replaced Stephen Blyth, who resigned in July for personal reasons after only 18 months. Narvekar will be the seventh CEO of the endowment in the last decade.

Much of the team that built and oversaw the expansion of Harvard’s natural resources holdings into international markets left last year after Blyth was promoted from head of public markets. The departures followed an internal, confidential report by McKinsey & Co. that scrutinized the benchmarks used to judge the performance, and award bonuses to the managers overseeing alternative assets.

The departures included Aguirre, Andrew Wiltshire, head of alternative assets, and Oliver Grantham, son of famed contrarian investor Jeremy Grantham. They were frequently among the highest paid at Harvard Management in recent years, with Wiltshire earning $10.5 million in 2014. They started a natural resources investment fund called Folium Capital this year.

Wiltshire declined to comment while Grantham and Aguirre didn’t respond to an e-mail.

“A lot of natural resources have not done as well as people thought they might,” said Jack Lutz, a forest economist at Forest Research Group in Hermon, Maine. “It’s been a rough couple of years.”