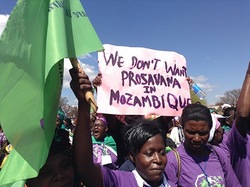 On 27 August 2016, the No to ProSAVANA Campaign, along with another 83 organizations from across the globe, published the “Joint statement and open questions on ProSAVANA by the civil society of Mozambique, Brazil and Japan in response to newly leaked government documents”.[1] This above-mentioned statement stresses the facts revealed in leaked documents[2] and the way the program has been carrying out actions against the organizations questioning the program through “ProSAVANA’s Communication Strategy” established by using the fund of JICA (Japan International Cooperation Agency)[3].

The documents also show the governments’ strategy, put in place by JICA consultants, to divide Mozambican civil society by marginalizing and excluding the member organizations of the No to ProSAVANA Campaign ever since the process of the creation of a “dialogue mechanism” aiming to redesign ProSAVANA’s Master Plan (MP) began.[4]  Nevertheless, the Campaign was the only entity that published a critical analysis of the MP.[5]

Given the irregularity, secrecy, illegitimacy and lack of transparency that characterized the “dialogue mechanism”, (Mechanism of Coordination of the Civil Society for the Development of the Nacala Corridor (MCSC-CN), the Campaign published two press releases denouncing these issues.[6]  Now, the leaked documents from JICA—which has financed this entire process—show a clear attempt to co-opt and divide of Mozambican civil society. The minutes of the meeting held at JICA’s office right after the creation of MCSC-CN—where the Mechanism coordinator (who is also coordinator of the Mozambican NGO, SOLIDARITY MOZAMBIQUE and Vice President of the Provincial Platform of the Civil Society of Nampula: PPOSC-N), a WWF staff (the coordinator of the Alliance of the Platforms of Civil Society Organisations for Natural Resources) and members of the ProSAVANA team (JICA, MASA and ABC) were present, among others—reveals that they discussed how to “indirectly” channel funds MCSC-CN, and that the coordinator of the mechanism stated:

“…We had already carried out ‘sensitizing missions’ towards other NGOs and the supporters of “No to ProSAVANA Campaign” to (promote to) align with the vision of the “mechanism” in Maputo and at provincial level”.[7]

These actions carried out directly or indirectly by the governments clearly violate the human rights guaranteed by the Universal Declaration of the Human Rights and other international agreements, the Constitution of the Republic of Mozambique and JICA’s Guidelines on Social and Environmental Considerations.[8] Forcing the implementation of ProSAVANA’s on communities will be a violation of their right to free, prior and informed consent (FPIC).

Even with all these irregularities, the governments of Mozambique, Brazil and Japan are pushing through the process of “redesigning” the Master Plan, according to a press release from the Civil Society Coordination Mechanism for the Nacala Corridor Development (MCSC-CN) published on 28 October 2016, which contains problematic information as to how the revision process of the Master Plan and public consultation will be conducted.

From the announcement seeking a consultant for the revision of ProSAVANA’s Master Plan and from the press release of MCSC-CN, it is important to mention that:
The timeline outlined in the press release is inadequate, discriminatory and does not allow for broad, democratic and inclusive stakeholder participation. Despite the long period during which MCSC-CN is supposedly working "to improve communication and coordination among CSOs, MASA and their international partners to develop a Nacala Corridor Agriculture Development Master Plan in an inclusive and participatory way..." the situation on the ground points to the arrogance and oppressiveness with which the ProSAVANA Program is carried out. No version of ProSAVANA has reflected a redesign of the program by Mozambicans and for Mozambicans. The simplified document that is supposed to be discussed in the consultations scheduled to begin on 23 November has not been made public.

We demand that all documentation for this program and process be made public and that copies of all documents be distributed to the communities along the Nacala Corridor and to all stakeholders, within an acceptable time frame for previous analysis.

We demand that JICA void its contract with SOLIDARITY MOZAMBIQUE due to the irregularities mentioned above, and that the governments of Mozambique, Japan and Brazil respect the human rights of Nacala Corridor communities as defined by the Universal Declaration of Human Rights, the constitution of the Republic of Mozambique and JICA’s own Guidelines on Social and Environmental Considerations and its institutional compliance.[9]

There will be no community consultations nor regional meetings nor conferences whatsoever based on simplified documents. We will not legitimize an obscure process filled with illegalities, where the real objectives are masked and nothing defined as serious and binding commitments.

Note: Notícias newspaper in Maputo refused to publish the Portuguese version of this press release, even as an announcement and even upon payment, since they claimed it went against their editorial line. They also refused to give this information in writing, since they said they did not need to justify the refusal.