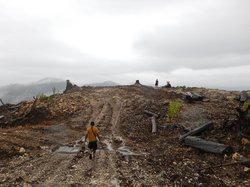 Peter Drury
Around the world, companies and speculators are engaged in a frantic rush for land. Millions of hectares are being bought up, citizens violently turfed off their land and critical ecosystems irrevocably damaged, in order to feed growing demand for fuel, food and raw materials.
At its worst, this is fatal. According to Global Witness data, in 2015 more than three people were murdered a week defending their land, forests and waterways from theft and destructive industries – the deadliest year on record.
A worrying number of land grabs in developing countries involve European companies or are backed by European money – from banks, equity and pension funds, for instance. Globally, the UK, France, Germany and the Netherlands consistently rank high amongst the countries involved in large-scale overseas agribusiness investments, for example, which is a sector rife with abuse.
We have just released a new report jointly with Friends of the Earth Europe, calling on the European Union to introduce regulations to prevent companies and financial investors from backing projects linked to social and environmental harm. The EU is currently reviewing legislation aimed at regulating the finance industry, so this is an ideal opportunity to make sure these rules include sufficient safeguards against the financing of land grabs.
Part of the problem is that EU companies and investors involved in overseas land-based projects are operating in a legal vacuum - traders and investors are under few, if any, legal obligations to check that products like palm oil, rubber or gold were legally or ethically sourced. According to the World Bank, investors are specifically targeting developing countries with weak governance, where local peoples’ rights are not protected. And because there are no laws governing these kind of investments, there is no way to prosecute or punish those responsible.
Often designed and enforced by industry itself, voluntary approaches are rarely, if ever, an effective substitute for concrete regulatory or fiscal measures. At present, the voluntary standards governing land-grabbing are being systematically ignored, abused, or simply forgotten about, which is wreaking havoc globally.  It’s also bad for business – putting companies and investors at financial and reputational risk.
Deutsche Bank, for example, was a major investor in Vietnamese rubber companies responsible for a wave of land grabs, human rights violations, illegal logging and the loss of local people’s food supply in Laos and Cambodia. Deutsche Bank is a signatory to the UN Principles of Responsible Investment, the UN Global Compact and the Banking Environment Initiative.
Standard Chartered, HSBC, Deutsche Bank, BNP Paribas and Allianz are EU-based investors which have all provided financial backing to a company driving palm oil expansion in Liberia that Global Witness found to be linked to beatings,threats, and arrests of local communities whose land was being taken.
Friends of the Earth has also published allegations highlighting the significant role of EU investors in financing companies linked to forest fires in Indonesia.
Standard Chartered and HSBC are both members of the Equator Principles, obliging them to implement the International Finance Corporation’s Performance Standards. HSBC is a signatory to the UN Principles for Responsible Investment, the Banking Environment Initiative, and has its own policy on not providing financial services to companies that violate communities’ rights to free, prior and informed consent.
These voluntary, market-based standards and codes of conduct have done little to protect the people of Cambodia, Laos, Indonesia or Liberia. Without a robust response from regulators these crises will worsen and spill over into new countries. Binding laws are urgently needed to stop European money from fuelling even more cases of land grabbing overseas.