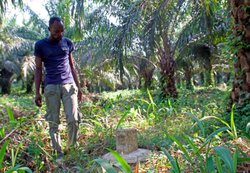 European and US development funds are bankrolling palm oil company Feronia Inc despite land and labour conflicts at its plantations in the Democratic Republic of the Congo (DRC). New information now raises questions as to whether the Canadian-based company misused millions of taxpayer dollars destined for international aid by way of companies connected to a high-level DRC politician.

Canadian-based agribusiness company Feronia Inc is majority owned by the UK government's CDC and other European and US development banks. Since 2012, development finance institutions (DFIs) have provided or committed nearly US$120 million to Feronia and its subsidiaries. DFIs claim to follow high standards for due diligence and are mandated to invest in private companies that contribute to the alleviation of poverty.

A report released today by African, European and international organisations provides further evidence to back the claims of local communities that Feronia is illegally occupying over 100,000 ha of land for its oil palm plantations and that wages for workers on the plantations remain below US$2 a day—an amount widely acknowledged to be insufficient to cover basic costs of living in the DRC.

The report also shines the light on complex and opaque financial mechanisms that Feronia operated through its Cayman Islands holding company and that appear to have benefited Barnabé Kikaya Bin Karubi, the Chief Diplomatic Advisor to President Joseph Kabila and the DRC’s most recent Ambassador to the UK (2009 – 2014).

“Feronia and its predecessors have been undermining the development of communities for over a century”, says Jean-François Mombia, director of RIAO-RDC, one of the authors of the report. “Why would development banks choose to support a company with such a brutal record of labour and human rights abuses, land grabbing and allegations of corruption? Despite what the company and the DFIs say, the situation for the communities and workers has not improved since the DFIs became involved”.

“We raised alarm bells about Feronia's involvement in land grabs and labour abuses already in an initial report in June 2015”, says Virginie Pissoort of SOS Faim (Belgium), another author of the report. “Despite our expressed concerns, the CDC increased its shareholding in the company and a new set of DFIs stepped in to provide Feronia with a financial lifeline, led by the DEG of Germany, FMO of the Netherlands and BIO of Belgium”.

“The apparent lack of due diligence from the DFIs is troubling, especially from the CDC”, says Saranel Benjamin of War on Want (UK), another author of the report. “We uncovered obscure, offshore accounting schemes and grave labour and land rights abuses that the CDC should have known about and should never have supported with UK taxpayer money”.

The authors of the report are calling for public inquiries into Feronia Inc and the financial support provided by the CDC and other DFIs. They want Feronia and its DFI backers to immediately make public its land concession documents and the financial reports of all of its current and former subsidiaries.

“Why does a company need eight or more subsidiaries in at least three different countries to manage 100,000 hectares of land? And why are DFIs financing such a company, operating in a country ranking 147 out of 187 in the 2015 Transparency International Corruption Perception Index?” asks Jutta Kill, advising urgewald (Germany) on this project, another author of the report. “More importantly, what will DEG and the other DFIs involved do to end the suffering of the communities who lost their lands and livelihoods to this company?”

The authors of the report call on Feronia and its DFI owners to adhere to the longstanding demands of affected communities for the immediate return of their lands and for reparations.