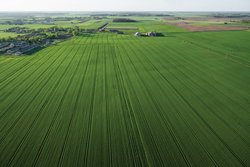 Rising land prices have fuelled concerns over ownership rules for farmland across the country. (Photo: Thinkstock)
Manitoba Cooperator | 25 October 2016
Senate to investigate farmland ownership
By Alex Binkley
The Senate agriculture committee is launching a study into the ownership of Canadian farmland and the challenges that farmers face in expanding their operations.
Hearings are expected in late October with the Canadian Federation of Agriculture among the first witnesses.
The committee has until next June 30 to complete the study into who is buying farmland and how foreign and corporate ownership could impact food production.
Senator Terry Mercer, deputy chairman of the committee, told the Senate, there seem to be different rules surrounding farm ownership by locals and foreigners alike.
ADVERTISEMENT
“We want to study these different possibilities and recommend ways to streamline in order to protect our farmland for Canadians,” Mercer said. “This new study should be informative in light of food supply and the feedback we’ve got from farmers in the ever-growing world population.”
Specifically the committee is to examine the reasons behind the increasing value of Canadian farmland as well as concerns of agricultural stakeholders and the challenges they face in acquiring farmland. The potential impact on landownership changes on the farming sector and possible solutions to resolve issues resulting from the acquisition of farmland will also be on the agenda.
The committee is currently wrapping up a study on international market access issues and plans to attend a large agricultural expo in China, he said. After that it will concentrate on the landownership issue.
The study will examine both foreign ownership of farmland as well as corporate takeover of land. It also plans to delve into intergenerational transfer issues. While it plans to hear from national organizations on the issue, it also wants provincial input, as landownership mainly falls under provincial jurisdiction.
The CFA has created a special issues committee tasked with exploring the long-term questions and concerns facing current and future access to farmland, including the role played by private equity.
The committee is to develop to expand CFA’s standing policy on farmland ownership and associated private equity interests and identify statistics vital to improved understanding of farmland ownership and availability, as well as mechanisms to collect them.
As background for that committee, CFA developed a detailed overview of current provincial farmland regulations, including a summary of relevant farmland ownership restrictions and insights into recent relevant policy developments.
It found that Ontario, Nova Scotia, Newfoundland and New Brunswick lacked any ownership restrictions although Ontario does have a provincial policy statement on the matter.
While different in details, the four western provinces, Quebec and Prince Edward Island do impose limits or control who can purchase farmland. Non-Canadians and foreign corporations generally face severe restrictions.