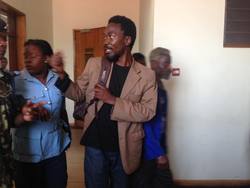 Sign the petitiin here
We are cognisant of a movement for the landless people led by Mr. Vincent Wandale called the People's Land Organisation (PLO) that is claiming reparations from the tea estates in Thyolo and Mulanje for the forced labour that their fore parents were subjected to in the estates by the colonial settlers. This movement is also demanding the restitution of land to them which they claim was expropriated by the colonial government from their fore parents.
The leaders and members of this movement were arrested on 1st and 2nd September 2016 on charges of conspiracy to commit misdemeanor, unauthorized use of land, inciting violence and criminal trespass.
We would therefore like to point out that the grievances on the question of land among the people of Thyolo and Mulanje are very valid and also complex such that arrests and prosecution on the part of the state cannot be the lasting solution.
It is well documented that prior to the formal declaration of Nyasaland (Malawi) as a British protectorate in 1891, the British imperial power had, under the Africa Orders in Council 1889 and 1892, appointed a Commissioner for “British Central Africa” who, in exercise of the Africa (Acquisition of Lands) Order 1898 and later the Nyasaland Order in Council 1907, purported to acquire and make grants of lands in the name of Her Majesty the Queen of Britain. A number of grants were thus made to white settlers in the Southern part of Nysaland (Malawi) who were unable or unwilling to negotiate with indigenous chiefs for concessions.
History also testifies that the formalisation of white settlement in Nyasaland (Malawi) through the issue of Certificates of Claims deprived indigenous communities of more than 1,482,102 hectares of land. Of this 1,080,000 hectares was expropriated by one company called the British South Africa Company. These Certificates were issued in respect of land that was not totally vacant.
The effect of this was therefore that firstly, indigenous communities lost ownership and control of land. Secondly, and perhaps more subtle and devastating, such communities lost all unalienated land to the colonial state under the fiction that the title to the whole of Nyasaland (Malawi) was now vested in the British monarch.
This is the underlying context within which the movement for the landless in Thyolo and Mulanje under PLO emerged.
Given the political and historic complexity of this issue, we therefore urge the state to immediately withdraw the court case mentioned above; release those who are detained on remand; and then urgently initiate a dialogue involving all stakeholders aimed at finding a win-win solution to this matter which has now become a ticking bomb having remained unresolved 52 years after Malawi attained independence from the Britain.
++++++++++++
For enquiries please contact: [email protected]
This petition will be delivered to:
His Excellency President of the Republic of Malawi; Prof. A.P. Mutharika
Malawi's Minister of Justice & Constitutional Affairs
Hon. Samuel Tembenu (MP)
Malawi's Presidential Adviser on Economic Affairs
Dr. Collins Magalasi