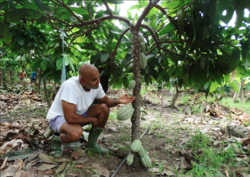 Biggest Africa cocoa farm takes shape in central Ivory Coast
by Olivier Monnier
In central-eastern Ivory Coast, a cocoa plantation that will be Africa’s biggest, spanning an area equal to about 3,000 soccer fields, is taking shape.
Solea, a unit of Brussels-based KKO International SA, is developing about 2,000 hectares (4,942 acres) of land near Bocanda and is trying to secure another 1,000 hectares. The project in the nation that’s the world’s top cocoa producer is unusual, because 90 percent of its cocoa comes from family-run farms of 2 to 4 hectares.
“We want to shake things up,” Solea Deputy Managing Director Indranil Ghosh said as he was driven in a pick-up truck between lines of cocoa trees set to produce the chocolate ingredient for the first time this season. “Such a large area of irrigated and fertilized cocoa plantations doesn’t exist anywhere else in Africa.”
About 800,000 farmers grow cocoa in Ivory Coast using a limited amount of fertilizer and reaping beans from aging trees. The result? Yields of about 500 kilograms (1,102 pounds) of beans per hectare, half of those in Malaysia.
Production ‘Archaic’
Methods “remain archaic,” said Ghosh. “Every year it’s the same: production is good when rains are good, production is bad when rains are bad. We can’t go on like this. It’s like when Apple upgrades its operating system. In Ivory Coast, cocoa has remained at version 1.0, we want to improve the protocol and create a cocoa 2.0 and go higher.”
Ivory Coast’s output fell 13 percent in the 2015-16 season to 1.57 million metric tons after plantations were hit by the worst desert winds in 30 years. A smaller-than-forecast African harvest in the season ended Sept. 30 led to a global shortage of 350,000 tons, the worst in decades, Olam International Ltd. said last month. The nation became the world’s No. 1 grower at the expense of its forests, which have made way for plantations.
Output Crunch
While demand for beans to make chocolate and cocoa butter for pharmaceuticals and cosmetics is increasing, global output isn’t, Ghosh said. “Everyone is obsessed with processing, but there’s no sustainable approach to make production answer tomorrow’s needs.”
Solea wants to plant 4 million cocoa trees on 3,000 hectares by the end of 2018 and targets production of as much as 15,000 metric tons of beans, with a yield of 5 tons a hectare, when its trees reach maturity in 2024.
Its two plantations -- Kotokonou and Akossikro -- are located on either side of the 725-kilometer (450-mile) N’Zi river in the central-east of the country, which was the hub of its cocoa belt in the 1960s. After years of extensive cocoa and coffee farming, the soils became unfertile, and decimated forests led to a drop in rain, prompting thousands of farmers to move to the nation’s west in the search of better land.
Irrigation System
Kotokonou is divided in 24 blocks of 20 hectares each, surrounded by 47 kilometers of tracks. Trees were planted every 2.5 meters on 400-meter straight lines. Akossikro is still being developed.
To overcome the lack of rain, Solea has set up a micro-irrigation system that supplies each of Kotokonou’s 800,000 trees. A 2.5-kilometer tube links the N’Zi river to a relay station, which connects to cocoa plants through thinner pipes. Each tree gets as many as 10 liters (2.6 gallons) of water and some soluble fertilizer from two drippers every second day.
“Drip irrigation on a large cocoa plantation -- that’s never been done," Solea Chief Financial Officer Laurent Skrypczak said. “We’re adapting to cocoa what was done with fruit trees in Europe 40 years ago.”
Securing the land was difficult, KKO Managing Director and Founder Remy Allemane said in Abidjan, the commercial capital. “Finding 20 or 50 hectares is easy, but 2,000 hectares in one piece is almost impossible."
Once found, it took months of talks to reach a deal with the local population. He signed leases of 35 years, the lifespan of a cocoa tree. In return, he committed to hire villagers and give landowners 5 percent of the company’s revenue. Solea employs 800 people.
The company has spent 17 million euros ($19 million) on the project and wants to issue 12 million euros in convertible bonds by the end of the year to complete it and expand overseas, Allemane said.
Mercedes Seed
Solea uses a more-productive hybrid cocoa seed called Mercedes, developed by an Ivorian research institute. Its one flaw is that trees grow unequally, which the company wants to address through cloning.
“We let the trees grow, suffer and then identify the best soldiers that resist dryness and we clone them on weaker trees," Ghosh said as he pointed a “mother tree” full of green pods as long as 20 centimeters (8 inches).
KKO is in talks to acquire an Ecuadorian company that specializes in intensive cocoa farming as it aims to develop at least 1,500 hectares of densified plantations in the South American nation, Madagascar and Ivory Coast. An agribusiness group in Nigeria has approached KKO to develop a cocoa plantation on a 10,000-hectare area, Allemane said, without giving further details.
In Kotokonou’s experimental section, Solea is looking at ways to have 6,000 cocoa trees per hectare -- compared with 1,300 in a regular Ivory Coast plantation. This has only been tested on an experimental farm in Ecuador, under different climate conditions.
“Cocoa trees will grow more compact; we’ll prune the leaves and pods will grow on the trunks," said Ghosh. “We know we’re not going to succeed at first try, we’ll probably make many mistakes. But it’s worth it. If it works, it will be a revolution.”
Original source: Bloomberg
TWITTER
FACEBOOK
WHATSAPP
PRINT
E-MAIL
TWITTER
FACEBOOK
WHATSAPP
E-MAIL