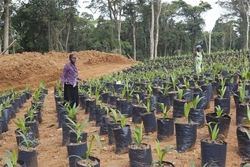 When I arrived in Babensi II village last July, the whole community was desperately expecting Greenpeace and its partners to provide them with answers and solutions to get their land back. For three years now, many of them have been deprived of their farms and crops, taken by SG Sustainable Oils Cameroon (SGSOC) palm oil plantation by false promises and without proper consultation or informed consent. The market of Babensi II remains almost empty since then.
In Nguti, 23 kilometers away, the same scenario repeated. Dozens of farmers gathered in the community hall to tell us about their fear that SGSOC will seize their farms. In a deeply emotional speech, Susan Tah Agbo explained that she noticed that trees had been marked in the forest, showing the land that SGSOC had demarcated, an area that includes numerous villagers’ farms. It happened after several officials from the company came to Nguti to explain their development plans. During the meeting, the community asked for a 5 kilometers buffer zone beyond their farms. A demand that was not respected.
It was not the first time we were meeting with these farmers, who have suffered the consequences of land grabbing for over seven years, since SGSOC settled in this area.  You might have heard about it when it was still owned by the US based company Herakles Farms.Since they withdrew from the project early 2015, this palm oil plantation has been operated by SGSOC, which holds a concession of approximately 20 000 hectares.
As its provisional land lease is about to expire this November, the communities’ expectations have never been that high, and they strongly hope that the government will stop the project.
To demonstrate their determination, 244 farmers (231 from Nguti and 13 from Babensi II) filed two collective complaints to the Court of First Instance in Bangem (South-West Province of Cameroon) last 27 September for trespass to land. Their hearing will take place on 9 November. Greenpeace welcomes this move as a first step to giving justice to these communities. To support their outcry, we launch together with our partners a petition to ask the Cameroonian government not to renew nor extend this lease.
Not only did SGSOC allegedly use bribery and intimidations toward communities, but they also lied to dozens of workers. They were fired without notice and compensation whereas their contracts were running for several months. As SGSOC representatives didn’t show up during a conciliation meeting at the Labor office of Mundemba organised last 14 September with 45 former employees, the case will escalate to the court of appeal in Buea.
SGSOC also promised to bring a host of benefits to communities that ceded land for the plantation. However, when I traveled there last July, people told me that, despite all the promises and rhetoric, SGSOC hasn’t contributed to local schools, provided access to medical facilities for workers or supplied electricity to the communities. The roads are still in an unacceptable condition.
I grew up in a forest area, so I am strongly aware of how important it is for communities living around it. They need land to farm and they need money from non-timber forest products to eat, send their children to school, university and more. How can such a project that is grabbing the land of communities and destroying the forest be sustainable? The Cameroonian government should ensure that the project is implemented to develop its economy and respect local communities and the environment. SGSOC plantation does none of these.
This company has not shown any good will during its three years provisional land lease. One can imagine what damage they could do if its lease is extended or renewed.
We as Cameroonians, as Africans, we have a responsibility to protect our resources, to make sure that our heritage is not stolen or destroyed.
These communities need us!
Please take action here to ask the Cameroonian government to take the right decision by stopping this land grab and forest destruction project.