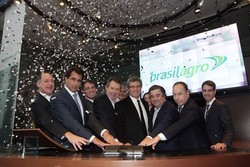 Agrimoney | 3 October 2016
South America's farm operators lure another top investor
What is it with celebrated US investors buying into South American farm operators?
A month after Florida-based Kopernik Global Investors, run by renowned stockpicker David Iben, took a 5% holding in SLC Agricola, which controls 470,000 hectares of Brazil, BrasilAgro has lured a US heavyweight investor too.
Ruane, Cunniff and Goldfarb has bought a 5.1% stake in BrasilAgro, which has a total landbank of more than 250,000 hectares - an area about the size of Luxembourg - in Brazil and Paraguay.
Ruane, Cunniff and Goldfarb manages the Sequoia Fund – which was founded in 1970 to take on former investors of Warren Buffett, after the so-called "Sage of Omaha" closed his investment partnership to focus on Berkshire Hathaway.
Already, George Soros, dubbed the "man who broke the Bank of England" after his winning bet on 1992's collapse in sterling, is an investor in the sector, with his Soros Fund Management business a big investor in Adecoagro, which farms in Argentina and Brazil.
'Strictly for investment'
In fact, Ruane, Cunniff and Goldfarb have bought their 2.9m shares in BrasilAgro - worth some R$32m, equivalent to $9.8m - for their 20-year old Acacia hedge fund rather than the Sequoia Fund, which gained fame for unbroken outperformance, as compared with the S&P 500 index, until this year, when a bet on pharmaceuticals group Valeant turned sour.
Still, the stake is not being used for any activist purposes, with a stock exchange filing saying that the holding "is strictly for investment purposes, and there is no intention to change [BrasilAgro's] control nor composition of the administrative structure".
The purchase makes Ruane, Cunniff and Goldfarb the third biggest investor in BrasilAgro, behind Argentine agricultural giant Cresud, which has a 41% holding, and hedge fund Autonomy.
And it comes amid a particular revival in South American shares, which have soared 42% in in Buenos Aires, as measured by the Merval index, while Sao Paulo's Bovespa index is up 39%, with gain in both cases spurred by expectations of improved economic management following the removal of discredited regimes.
For foreign investors, the gains have been even larger, with the removal of Dilma Rousseff as president also helping the Brazilian real strengthen some 20% against the dollar this year, to close on Friday at R$3.2589 per $1.
'Prolonged drought'
However, shares in South America's farm operators have struggled to keep up the pace, with Sao Paulo-listed stock in BrasilAgro up only 5.8% in 2016, and SLC Agricola shares falling by 11%.
Both groups suffered dents to Brazilian harvests from a lack of rain, with BrasilAgro last month reporting that "prolonged drought in the Bahia and Piauí farms [reduced] soybean and corn yields by 49% and 50% respectively".
BrasilAgro's came as the group reported a loss of R$17.3m for the April-to-June quarter, compared with earnings of R$166.2m a year before – the day before longstanding Julio Toledo Piza resigned as chief executive.
Indeed, Ruane, Cunniff and Goldfarb's investment would appear a vote of faith in new chief executive André Guillaumon, promoted from chief operating officer.
BrasilAgro's first public move under Mr Guillaumon's leadership, of announcing a buyback of 1.34m shares, will not have done his investor credentials any harm.
But it is improved crop-growing weather which would prove his biggest ally.