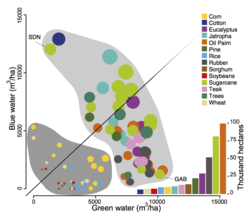 Significance
Freshwater appropriation can have vast impacts, depending on management and scale of water use. Since 2000, foreign investors have contracted an area the size of the United Kingdom in Africa, leading to increased pressure on water resources. Here we couple site-specific water demand for the crops planted there to the efficiency of different irrigation systems, while relating these estimates to local water availability. This approach enables us to identify “hotspot” areas of freshwater use where crops demand more water from irrigation than can be supplied by soil moisture, where the potential water demands from large-scale land acquisitions pose a risk for increased competition over water resources. Of these land acquisitions, 18% would be hotspots even with the most efficient irrigation system implemented.

Abstract
In the last decade, more than 22 million ha of land have been contracted to large-scale land acquisitions in Africa, leading to increased pressures, competition, and conflicts over freshwater resources. Currently, 3% of contracted land is in production, for which we model site-specific water demands to indicate where freshwater appropriation might pose high socioenvironmental challenges. We use the dynamic global vegetation model Lund–Potsdam–Jena managed Land to simulate green (precipitation stored in soils and consumed by plants through evapotranspiration) and blue (extracted from rivers, lakes, aquifers, and dams) water demand and crop yields for seven irrigation scenarios, and compare these data with two baseline scenarios of staple crops representing previous water demand. We find that most land acquisitions are planted with crops that demand large volumes of water (>9,000 m3⋅ha−1) like sugarcane, jatropha, and eucalyptus, and that staple crops have lower water requirements (<7,000 m3⋅ha−1). Blue water demand varies with irrigation system, crop choice, and climate. Even if the most efficient irrigation systems were implemented, 18% of the land acquisitions, totaling 91,000 ha, would still require more than 50% of water from blue water sources. These hotspots indicate areas at risk for transgressing regional constraints for freshwater use as a result of overconsumption of blue water, where socioenvironmental systems might face increased conflicts and tensions over water resources.