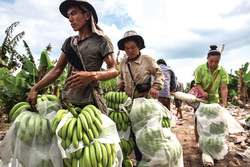 Workers on a plantation in Bokeo province, northern Laos. (Photo: Guillaume Payen)
Vientiane Times | 30 September 2016
Officials inspect banana plantation after workers fall ill
Vientiane officials went to observe operations at a 40,000-hectare banana plantation in Pakngum district yesterday after five workers fell ill.
It is believed they were suffering from the toxic effects of a Chinese-made pesticide they had been applying to banana trees.
A group of five men and women were taken to a hospital near the plantation on Wednesday after feeling intoxicated, nauseous and developing headaches.
A specialist from the Vientiane Health Department, DrChanthalayXayavong, told Vientiane Times the hospital discharged them the same evening.
"None of the workers were seriously ill, just suffering from the effects of the pesticide," he said.
The workers had been using their hands to apply chemical fertiliser and a Chinese pesticide from a pail onto the banana trees, without wearing protective gloves or face masks.
DrChanthalay said 17 families in Xienglae-tha village were working on the banana plantation, which is under Chinese ownership. Each person tends to 5,000 trees, from the time they are planted until the fruit is harvested.
Chinese-owned banana plantations are under cultivation in many parts of northern Laos. The fruit is sold locally and delivered to customers in China. But many people have expressed concern that the Chinese growers are allowed to use chemical fertiliser and pesticides.
The use of many chemical pesticides has been banned because of the health risks to consumers and the potential damage to the environment.
An official from the Vientiane Agriculture and Forestry Department, MrVadsanaSychaleun, said about 55 kinds of pesticide are banned, but some other kinds were being used by banana farmers around the country, including in Vientiane, with the permission of the Department of Agriculture.
"We don't know the type of pesticide that is being used on the banana farm in Xienglae-tha village or whether its use is authorised because the writing on the sack is Chinese," he said.
The owner of the banana farm where the workers fell ill said he bought the pesticide in Bokeo province. Vientiane agriculture officials have advised him to temporarily stop using the pesticide until the authorities have checked whether its use is permitted in Laos.
The 40,000-hectare banana plantation in Pakngum district uses chemical fertiliser from Laos and Thailand, but the pesticide is made in China.
Other Vientiane agriculture officials said chemical fertilisers won't harm people who eat bananas because they are only used to improve the soil quality.
The provinces of Bokeo, LuangPrabang, Oudomxay and Phongsaly mainly grow bananas for export to China, with the majority of plantations located in Bokeo and Phongsaly.