Conservationists warn against land grabbing in Nigeria by foreign firms 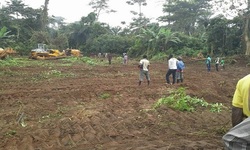 Conservationists warn against land grabbing in Nigeria by foreign firms
by Patrick Adoga
As the world celebrates the International Day of Struggle against Monoculture Tree Plantations today, conservationists have warned transnational companies from Europe, America and Asia against scramble for land in Nigeria and Africa for industrial agro-business.
They said Nigerian and African governments “must rise to protect the people from this invasive land grab that threatens all life forms, especially the rural poor who are the best custodians of forest, food, land and water.
”A statement titled, Stop the land bazaar! Plantations are not forests, issued by Project Officer, Forest and Biodiversity ERA/FoE Nigeria and Coordinator of Forest and Biodiversity Friends of the Earth Africa (FoEA), Mrs. Rita Uwaka, warned against the new form of “colonialism.”
She said: “These land deals, mostly shrouded in secrecy by governments, have continued to fuel deforestation, hunger and starvation, displacement of communities and biodiversity loss, with impacts on women and children. In the name of structural transformation, African lands are been grabbed by multinational companies for dangerous eco-business that violates the rights of mother earth.”
Uwaka noted: “From Nigeria to Uganda and from Mozambique to Liberia, the stories are the same – the operations of these companies are rife with human rights abuses in communities that play host to them. The more land grabbed for industrial plantations, the more hunger declared on community people and territories, the more impact it will have on the climate.
“Other huge consequences of this ‘green desert’, otherwise known as plantations, are over reliance of heavy toxic chemicals, which kill micro organisms, degrade soil nutrients, pollute surface and underground water system and sometimes lead to the disappearance of water bodies, like in the case of pine and eucalyptus plantations in Mozambique. Industrial plantations do not provide real solutions to climate change. They promote climate crisis.”
Advertisement
She said that in Nigeria, deforestation, mostly for industrial plantations, is the second largest contributor to climate change, after gas flaring in the Niger Delta. Oil Palm and rubber are the predominant agro-commodities companies. The biggest drivers are Asians in Cross Rivers State with over 30,000 hectares of oil palm plantation of the 100,000 hectares of forest and community farmlands targeted. Others are the French and Belgium and some companies in Nigeria.
She said: “This growing ‘corporate land grab’ fuelling forest destruction in Nigeria is not for public good but for corporate and selfish interests, to enrich private pockets, feed international markets and further impoverish small holder farmers and forest-dependent communities. Plantations are not forests! The United Nations Food and Agriculture Organisation (FAO) should stop deceiving African governments and the world. If a particular tree is planted over a vast number of lands, it does not qualify it as a forest. The FAO definition of a forest is a crime against nature and it is unacceptable. It is unsustainable.”
The conservationists said: “Community forest management methods and agro-ecology are the solutions for a true democratic and bottom up control over natural resources by the very people who depend on them for survival. There must be a deliberate effort for land reforms in Nigeria and other African countries where all land belongs to the government.
“Policies relating to land, trade and investment must put human rights at the core of decision making, as well as people, not companies over profits, to protect and support the resources we all depend on for sustenance. We demand that the Cross Rivers and Edo State governments with the highest record of land grabbing for large scale monoculture tree plantations in Nigeria stop this land bazaar that commodifies nature.”