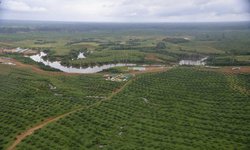 Oil palm plantations, like this one in Kango being developed by Singaporean firm Olam, are part of a government drive to make Gabon an emerging economy by 2025. (Photo: Xavier Bourgois/AFP/Getty Images)
Guardian | 16 August 2016