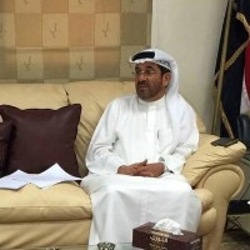 
AAAID Investments have exceeded its paid capital: executive
KHARTOUM (sudanow.info.sd) – The Arab Authority For Agricultural Investment and Development (AAAID) was launched 40 years ago with the aim of  boosting the Arab World’s food security via the provision of agricultural and food products at reasonable prices.
The AAAID membership is open for all Arab states that can contribute to its capital.

The organization, based in Khartoum, has launched a lot of investment projects in Sudan and elsewhere in the Arab region and is looking forward to enhance its performance and widen its investments.

Sudannow has conducted an elaborate interview with the AAAID Chairman Mohammad Obaid al-Mazrou’ee on the organization’s activity, past and present, and its plans for the future. Following are excerpts of the INTERVIEW:

Q: What is the volume of the AAAID investments, so far?

A: The AAAAID investments had reached a total  of about $ 575 million by the end of 2015. This sum represents over 100% of the Authority’s paid capital. The Authority’s investments are distributed over 34 companies in 12 Arab states. The Authority’s  total assets now stand at $ 4.2 Billion. The Authority has contributed at different degrees to the Arab food security through the production of strategic commodities in a number of Arab countries. The Authority has, further, created 100,000 jobs. Its net profit had jumped by 25% in 2015  as a result of the selling of some of its companies to private investors and the improvement in the performance of some of its investment funds.
Q: How would you assess the progress of the AAAID strategy with respect to  the achievement of the Arab food security?
A: The Authority’s previous strategy was lacking in vision. That is why I asked the Authority’s board of Directors to review and upgrade that strategy and redefine the Authority’s objectives. The board has approved this proposal.
Q:What is your new strategy and what is your vision about it ?
A: My vision is that the AAAID should lead the way towards the Arab food security, with focus on the provision of the Arab World’s basic food commodities. This dictates the promotion of  the agricultural sector through the training of manpower, the conduction of applied research, land reclamation, the achievement of lucrative returns in order to guarantee the continuation of productivity and care for small-scale farmers who constitute 80% of the Arab World’s population.

The strategy also calls for the geographical redistribution of the Authority’s schemes, the restructuring of its companies for further effectiveness, the promotion of interests, the assessment of standing funding, investing available funds in existing companies that have shown high rates of growth and giving priority for private contributions to the Authority’s companies.

In Iraq we are studying  a dairy project.

All these projects are in partnership with the private sector. The Authority has now a list of promising opportunities  in agricultural investment whether in existing or new projects. The authority calls upon businesses to contribute to the assessment and funding of these ventures.

Q: Do you foresee any indications that the private  businesses are willing to invest in agriculture?

A: There is sure continuous demand for investment in agriculture. The existing food gap in the Arab World indicates that there are opportunities that should be exploited and employed in the best possible manner.

Q:But there are well known impediments in this respect?

A:contrary to what happens in other sectors, investment in agriculture is venturesome.  For instance the real state sector is safe from hazards such as pests, climate change and  drought that affect the production, the market and the prices in the agriculture.

One of the plagues of agricultural investment in the Arab region is the poor infrastructure in countries with vast agricultural potentials. Economic instability in some Arab states is also another problem. There is also the problem of arable land ownership in addition to the absence of mechanisms for implementing concessions and exemptions accorded to investors. There is also the humble experience of the private sector with respect to investment in agriculture added to the conflicting specializations and jurisdictions among the different government bodies. There is also absence of exploiting the competitive and relative qualities in the agricultural sector such as the use of modern technology  and the lack in  agricultural research  and innovations and the poor management of agricultural schemes.

Q:Should this mean that agriculture is not attractive to investors?

A: It is increasingly appealing to investors. Scores of investors have expressed the desire for partnerships with the Authority in this regard.The agricultural sector can be lucrative if technological packages, precise research, good training and field expertise are put in place. Here I must reaffirm the need to furnish investors with due data and financial indications that convince them to enter this sector. If  precise studies, necessary facilities and infrastructures are made available, then the investors can come along and invest in agriculture without hesitation.

Q: How would you assess performance of the AAAID companies in Sudan?

A: The AAAID has 11 agro-industry companies in Sudan, a number of them growing in a good manner. There are other companies that face some little difficulties and there are some faltering companies. We are monitoring the performance of all  companies that face problems and are trying to restructure them. We are just waiting for our partners and the government to settle the problems of land and debts and then we can go forward all anew. In this regard the land problems in Oum Doum project, Khartoum’s East Nile Locality, have been resolved recently and the company will come in action, though at a limited scale at the beginning and will gradually expand in the future.

Q: Some initiatives have been put forward for the attainment of Arab food security, what is the AAAID role in the achievement of President Bashir’s initiative, for instance?

After the initiative was declared, the Sudanese Government made an inventory of projects, lands and locations for the initiative projects. Even the initial estimates of the project’s cost were made. We are currently examining that study and the projects it has proposed to pick from them what suits the Authority’s objectives of redressing the gap in the Arab food security. We will shortlist those projects and examine them in detail before presenting them to would-be investors.

Q: Tell us about the Arab investment conference you used to convene.

A: This is the third conference which will be held in Sudan early next year. The conference is not an annual event. Top of the agenda of this session is President Bashir’s initiative. The second topic deals with the financial and agricultural policies. The third topic is concerned with agro-industry. Agro-industry depends on such products as milk, sugar and even poultry is considered an industry. We also have the production of cereals , namely sorghum, sesame groundnuts , wheat and cotton.
The fourth topic is concerned with research and innovations.

The conference will also seek to exploit investment opportunities in countries with vast resources such as Sudan, Egypt, Morocco, Mauritania , Syria and Iraq. We also seek to invest in countries that have relative advantages and also any other country that has something that can help us in agriculture.

The conference will try to draw attention to agriculture. We can find capitals in the Arab world. We also notice that Turkey, South Africa, China and some Latin American countries are turning to investment in agriculture. Through this conference we want to create facilities and incentives for the investors. These facilities and incentives include easy and smooth procedures. We also want to build roads and provide electricity as tools for increasing investments and encouraging trade. All this effort is aimed at reducing the food gap in the Arab World and raising the GDP of the concerned country.

International, regional and Arab organizations have been invited to the conference , which will be attended by the Arab agriculture and investment ministers, the Arab chambers of commerce and industry in addition to funds and financial institutions and unions. So far some 30 of these entities have agreed to attend the conference.