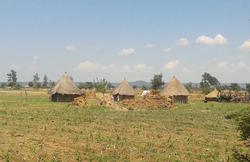 A homestead for some of the villagers displaced from their land by the Green Fuel ethanol plant, Zimbabwe. (Photo: Platform for Youth Development)
Mongabay | 28 July 2016