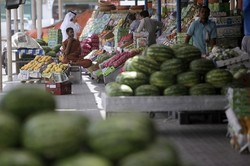 The fruit and vegetable market in Mina Zayed, Abu Dhabi, where produce is sold. Most of the UAE’s food supply is dependent on food imports from overseas. (Photo: Sammy Dallal / The National)
The National | 21 July 2016