Foreigners own about 15% of Latvian agricultural land - farming association 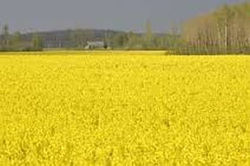 Foreigners own about 15% of Latvian agricultural land - farming association
About 15-16 % of agricultural land in Latvia belong to foreigners, Martins Trons, an expert of the Latvian faming association Zemnieku Saeima (Farmers’ Assembly), said at the meeting of the parliamentary committee on mandates, ethics and submissions on Wednesday, reports LETA.
The parliamentary committee today discussed the collective legislative initiative for banning sale of agricultural land and forests to foreigners.
Trons said the existing eligibility criteria for buyers of agricultural land were too lax and should be tightened. He said that in France, for example, any land sales were scrutinized by a municipal committee and it was nearly impossible for foreigners to buy any land.
Representatives from the Agriculture Ministry and Economics Ministry said they did not support the initiative to prohibit selling land to foreigners, as Latvia must observe its international commitments.
MP Gunars Kutris (For Latvia From The Heart) suggested that the local governments should have the right of first refusal in respect of agricultural land that is up for sale so that they could buy land at the same price for which it otherwise would be sold to a foreign national.
MP Janis Vucans (Greens/Farmers) pointed out that the domestic market of agricultural land was underdeveloped due to low buying ability of the local population, and this problem should be addressed first.
As reported, a petition calling for a ban on selling land to foreigners has gathered over 10,000 signatures on Manabalss.lv public initiatives website and can now be submitted to the parliament for review. The petition, announced by politician Armands Krauze (Greens/Farmers), was posted on Manabalss.lv in December 2013.
The ban on selling land to citizens of foreign countries was proposed in order to protect local farmers who cannot compete with large Danish, German and other European agricultural enterprises in terms of prices and possibilities to attract funding, he said.
Krauze indicated in his application that the initiative is intended to ensure that Latvia’s agricultural and forest lands remain in Latvian citizens’ possession and to stop these land properties from being “sold out to foreigners and multinational investment funds”. Krauze has urged the Latvian lawmakers to call a referendum on the legislative initiative stipulating that agricultural and forest land in Latvia can only belong to citizens of Latvia or enterprises fully owned by citizens of Latvia.