Argentina: From the farm to the tax shelter 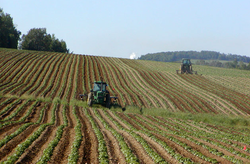 Companies based in tax shelters such as the Cayman Islands, Hong Kong and Andorra control 1 in every 16 hectares of foreign-owned land in Argentina. The government recently amended the Land Law by decree in order to promote further foreign investments in farmland.

The global network of offshore services is not limited to secret bank accounts and front companies managing undeclared financial assets. Companies based in tax havens—such as the Cayman Islands, Uruguay, Hong Kong, Liechtenstein, Andorra, the British Virgin Islands and Luxembourg—control 1.1 million hectares of rural land in Argentina. According to the National Registry of Rural Lands, firms located in secret jurisdictions manage 1 in every 16 hectares of foreign-owned land.

Changes to the Rural Land Law proposed last week by the government promote the increased foreign control of land. The elimination of the Financial Information Unit and the AFIP allows foreign companies to channel their operations through the opaque structures provided by tax havens. The area of rural land controlled by offshore companies currently amounts to 55 times the size of Buenos Aires.

Legislation passed in late 2011 to regulate the acquisition of rural land by foreigners established a 15 per cent limit on how much land could be owned by foreign investors. Foreigners currently control 6.1 per cent of the country’s territory—roughly 16 million hectares. Arguing for the need to “enable investments in the country", the government passed a decree last Thursday paving the way for the Rural Land Act, which would promote the sale of land to foreigners.

Nearly 80 per cent of the area of foreign-owned rural land is in the hands of only 253 individuals and companies—representing 1.6 per cent of foreign landowners. The latest official statistics show that US investors own the most land, with almost three million hectares, followed by Italian and Spanish investors. In fourth and fifth place are two countries recognized as tax shelters: Switzerland and Uruguay. There is insufficient information available to determine what proportion of Swiss and Uruguayan landowners operate through corporate structures originating in another country.

In order to promote foreign investment, and as a prelude to profound changes in current laws, President Macri's government has removed regulatory hurdles for foreign entities or individuals seeking to acquire rural land. The Law had established that foreign investors wishing to acquire land in the country must first obtain a certificate of authorization from the Land Registry. This document aimed to ensure compliance with the restrictions on foreign ownership outlined in legislation, which PRO [Propuesta Republicana party] legislators abstained from voting on in late 2011. According to the law, foreigners can control 15 per cent of the national territory; foreign companies cannot own rural land containing major bodies of water; and a maximum of 1,000 hectares can be owned in the core area of each province.

The government decree did not change these restrictions. However, it did open the door for the transfer of shares to foreigners while only "informing" the Registry without obtaining a certificate of authorization. The Centre for Patagonia Studies [Centro de Estudios Patagonia] warns that the new legislation instructs those interested in bypassing regulations limitations on how to do it: if the company or individual exceeds the limits outlined in Article10 of Law 26.737 (restrictions related to bodies of water and the 1,000-hectare limit in core areas), it has 90 days to adhere to the law by transferring land to subsidiary companies or changing the type of production.

*Article translated from the original Spanish by GRAIN