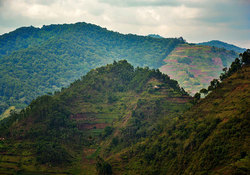 There is a tendency to regard forestland as free fertile land that could be easily allocated to investors. (Photo by Rod Waddington)

Uganda is considered one of the most beautiful countries in the African continent because of its diverse ecosystems that include natural forests, savanna woodlands, wetlands, lakes and rivers. Early European explorers branded it the “Pearl of Africa.” Much of Uganda lies on the African plateau between 900-1,500 meters above sea level. Its tropical highland forests are divided in three distinct geographical zones, characterized by rainfall regimes — the eastern rim of the Western Rift Valley in the west, the broad belt around the northwestern shores of Lake Victoria, and the spectacular mountains in the east.

Given its location in a zone between the drier East African savannas and the more moist West African rain forests, as well as its high altitude ranges, the country is home to some of the highest concentrations of biodiversity in Africa. It reportedly has more species of primates than any other country in the world. According to the Convention of Biological Diversity, the country’s forests harbor at least 7.5 percent of the world’s known mammal species, 10.2 percent of our bird species, and 6.8 percent of the world’s birds.

But now the country’s rich natural heritage is under severe threat due to a massive loss in forest cover, a loss that’s increased at a very high rate in recent years.

In the past century, Uganda’s forests have been under severe pressure mainly from the expansion of agricultural land as a result of a growing population, increasing demand for charcoal and fuel, unchecked logging and weak legal protections and even weaker enforcement of the forest protection laws. According to the country’s 2012 National State of the Environment report, Uganda's forest area is being lost at a rate of 1.8 percent per year. In total, between 1990 and 2010, this east African country lost 31 percent of its forest cover — a decline from 5 million hectares to 3.6 million hectares between 1990 and 2010. Some parts of the country — such as Mayuge, Wakiso, Mubende, Mitayana, Kibaale, and Buikwe — are losing their forest cover at higher rates than others.

Apart from the usual causes of deforestation cited above, there has been growing evidence that forest land grabbing by both individuals as well as a powerful alliance of international corporations and government officials is one of the major factors currently driving this loss of forest cover.

Take 29,000 hectare Mabira Central Forest Reserve, one of Uganda’s largest surviving natural rainforest, for instance. For nearly a decade this forest in eastern Uganda that is home to many endangered species, including a species of Old World monkey called Uganda mangabey, has been targeted for exploitation by the Ugandan government that is eager to attract foreign investment.

Back in 2007, the Ugandan government announced plans to de-list one-third of Mariba Forest from its protected status and give it away to a private corporation for sugarcane plantations and biofuel processing. The plan was opposed by environmentalists concerned about its impact on endangered species and local water resources among other things, as well as by human rights activists concerned about the damage of livelihoods of local people. Opposition to the project led to riots and the death of three people and the project has since been suspended.

But though this official planned giveaway seemed to have failed, the forest is still suffering from individuals who are cutting trees and grabbing the forestland.  According to Uganda National forestry Authority, about 100 hectares of Mabira is currently under intense illegal land grabbing and tree cutting.

Meanwhile Namanve forest reserve, which lies a mere 15 kilometers from the capital city of Kampala, center and part of which was de-gazetted for the establishment of an industrial park, is subject to a tussle between the government, which wants to run a power transmission line through an extensive swamp in the forest, and squatters who have settled in the forest. Another example is in Kalangala where global palm oil giant Wilmar International was allocated forestland to grow palm oil plantations.

According to a 2012 Friends of the Earth report, in the past two decades, more than 3,600 hectares of the forestland in Uganda has been cleared to make way for palm oil plantations owned by international corporations. Many of these plantations also pushed out local farmers who grow crops on forestland, leading to protracted land disputes. A 2011 Oxfam report found that at least 2,000 farmers had been evicted from a government-owned forest in Mubende and Kiboga districts to make way for the British forestry company, New Forests Company (NFC).

Government officials too, aren’t above exploiting the country’s forests for their own profit. Recently, a the Joint Chief Of Staff of the Ugandan army, Major General Samuel Mbadi was involved in grabbing a large chunk of land within the Mujuzi Forest Reserve in southwestern Uganda.

Fred Kalanz, a researcher with the National Forestry Resources, Research Institute says, the country’s leaders often hide the truth about deforestation and its causes, instead disguising the destruction of forest as necessary for poverty alleviation and agricultural modernization. Kalanz says there is a tendency to regard forestland as free fertile land that could be easily allocated to investors.

“The situation is aggravated by populist politics and weak enforcement of policy and legislative frameworks. In some cases, local people find it easy to encroach on these forests because they are facilitated and protected by political leaders,” he says.

“Mercenary veteran groups have been organized that are hired by elite individuals interested in grabbing forest land. Such organized groups mobilize people from far off areas to settle in the forest and use friendly politicians to resist evictions, eventually weakening the institutions meant to protect the forests,” he explains. “They pave the way for their masters to grab the land. This is followed by a wave of land wrangles eventually culminating in elite individuals taking over. Eventual land grabbers are certainly wealthy and elite individuals with strong political and economic ties.”

Rose Hakizimana was on such “far off” person who had been living on forestland in Kabale district in western Uganda. Forestry officials evicted her family last year.

“I was born in Katuna near the border with Rwanda, where our family settled on a small piece of land and we were told that there is cheap land near Kibaale forest,” says Hakizimana, who now lives in Masaka, a large town in central Uganda, west of Lake Victoria.  “We settled on that land about 15 years after my parents purchased it from locals who were selling a big chunk of land between Shilling 250,000 and 400,000 (US $74 to $118). My parents bought a piece of land not knowing that that was a government forest reserve,” she says. “Since then we have had run-ins with NFA [National Forest Authority over evictions. We can neither trace the people who sold the land to us nor is there anyone who can compensate us.”

Kalanzi says that “while efforts are being made to abate the obvious causes of deforestation in Uganda, more attention should be paid to land grabbing which is becoming a salient factor in the loss of forest cover in the country”.

Masaba Richard, a forest ranger at Mt. Elgon Forest National Park, told Earth Island Journal that politicians are to blame for the spike in land grabs across the country.  “Like in the past 2016 elections, I heard my area MP [member of parliament] promising land to the constituency if elected and today there are people trying to enter the forest. We fight with them every day here” Masaba says.

Uganda’s Minister of Water and Environment, Kamuntu Ephraim, agrees that there have been many cases of forestland grabbing in past years and said that the ministry was what’s required to protect the forests. “We shall work together with other ministries to make sure we save our forest cover,” he says.

Nangayi Guyson is a freelance journalist based in Kampala, Uganda. He writes about environmental, social life, business, humanitarian, religious and political issues from around the African continent. His work has appeared on, Aljazeera English and elsewhere. You can follow him on Twitter at @nguyson or read his blog.