Matopiba: Killing the Cerrado and its people 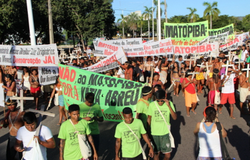 To:
The President of the Republic
The Ministry of Justice
The National Indian Foundation (FUNAI)
The Federal Public Ministry (MPF)
Brazilian society


Matopiba: killing the Cerrado and its people

Final report from the III Assembly of Indigenous Peoples of Goias and Tocantins, 20-23 June 2016

As the last trees of the Cerrado fall; the last remaining springs and clean rivers vanish; the animals and other species of the region desperately struggle in the face of the contamination of the land, water and air; and when the sun scorches the earth; then all forms of life will be doomed. Only then will our warning cries be remembered, but it will be too late. A few unscrupulous humans, driven by boundless greed, have ordered the end of life as we know it. The wealthy and privileged will also perish. However, it will be too late, as our warning cries will have been stifled.

In order to resist this destructive process against all life, it is imperative that our indigenous ancestral wisdom, as well as the traditional knowledge of communities and forest peoples, be respected and valued. Our voice and our cry should be added to those of scientists, researchers, all those who love Planet Earth—our common home—as well as Pope Francis and others who celebrate Life.

That is why we, the Apinajé, Krahô, Xerente, Karajá Xambioá, Krahô-Kanela, Kanela of Tocantins, Avá-Canoeiro and Javaé indigenous peoples from Tocantins, Tapuia from Goiás, Kayapó from Para, Guarani Kaiowá from Mato Grosso do Sul and Pataxó Uh-Uh-Hãe, from Bahia, along with traditional communities, including the quebradeiras de coco (women “coconut breakers”), quilombolas (Afro-Brazilians), riverine communities, peasants and pastoralists stand together and say NO to the Matopiba Agricultural Development Plan (PDA), which is a project of destruction and death for the Cerrado and its people in the areas of Maranhão, Tocantins, Piauí and Bahia.

This is the latest in a series of projects that have been implemented over the last few decades in this ecosystem, with the goal of imposing a developmental logic that favours agribusiness and the export of commodities. Programmes such as “Prodecer” I, II and III and “Campos Lindos” and “Formoso” were the result of a project conducted in partnership with the Japan International Cooperation Agency (JICA). The project was designed by representatives of various companies and the Japanese government, with the aim of exploiting the Cerrado in order to strengthen Brazil’s position in the international grain trade. Over 40 years, the result of this has been an increase in deforestation—with a reduction of more than 70 per cent of the country’s vegetation and widespread soil compaction and contamination, resulting in a decrease in rainfall, with aquifers consequently no longer being replenished and rivers and streams drying up, seriously threatening access to water and people’s food sovereignty.

We also say NO to mega-infrastructure projects such as dams, canals and roads; agribusiness including monocultures, irrigation, the massive use of pesticides and the privatisation of seeds. These activities contribute to the same process of destruction and death. We reject the construction of the Serra Quebrada, Santa Isabel and Perdida II hydroelectric plants and the Maraba and Araguiaia/Tocantins canals.

We are opposed to this devastation and want to contribute instead to building a new society that is respectful of Mother Earth, a world in which all forms of life can coexist in harmony. We want to offer our wisdom, knowledge and proposals for Living Well (Bem Viver).

Given the above, we demand:
We strongly reject the disrespectful attitude towards indigenous peoples by Ivanezilha Ferreira Noleto, the coordinator for the Special Indigenous Health Districts (DSEI) - Tocantins, for not having attended the III Assembly of Indigenous Peoples of Goiás and Tocantins, and have sent a team that was utterly unprepared and that has no power or autonomy to address our demands and complaints regarding the precariousness of indigenous health;

We also demand a thorough investigation and punishment of the murderers of our leaders. We hold the Brazilian State responsible for the violence and genocide against indigenous leaders of Mato Grosso do Sul, especially the Guarani and Kaiowá leaders. Impunity signifies a stimulus to massacre our people.

Finally, we, the six hundred plus participants of the III Assembly Indigenous Peoples of Goiás and Tocantins, held in Palmas (TO) between 20 and 23 June 2016, call upon Brazilian society to fight with us in the defence of the hard-won indigenous rights achieved in the last Federal Constitution of 1988, in defence of Planet Earth, and with the aim of building a just, democratic and pluralistic society.