Foreigners own 1.4 million hectares of farmland 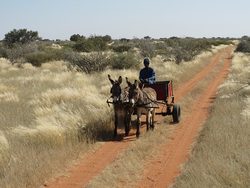 by Kuzeeko Tjitemisa
A total of 281 foreign nationals own 1.4 million hectares of agricultural land in Namibia, Minister of Land Reform Utoni Nujoma revealed last week.
Responding to questions posed by DTA president McHenry Venaani in the National Assembly, Nujoma said of the 281 foreign nationals some own land in partnership with Namibians.
Yesterday, Venaani told reporters he would petition President Hage Geingob in an open letter on the issue, adding that the Harambee Prosperity Plan (HPP) cannot be implemented while farmland remains in the hands of foreigners.
During the National Assembly session, Nujoma stressed that it remains a challenge to verify and conclude who the absentee landowners are, but said the process of determining this is ongoing.
According to Nujoma, 129 German nationals top the list, owning over 620 000 hectares of farmland.
Meanwhile, last year the then minister of lands Alpheus !Naruseb told New Era that Cabinet was hard at work to complete a report outlining the way forward on the much-awaited legislation on foreign ownership of land.
The ruling party Swapo resolved about three years ago to ban foreigners from owning farmland in the country, but government is still working out modalities around the suggestion.
Land-starved Namibians have in recent years urged government to devise laws banning foreign nationals from owning land and to shorten the lease period which is currently benched at 99 years.
Young people in particular have virtually become impatient with the land question, although many are in need of urban land to set up their houses – and not necessarily farmland.
Meanwhile, the ministry earlier this year revealed that it has acquired 36 farms at a cost of more than N$290 million to resettle 57 families between April 2015 and February 2016.
Since independence in 1990 government has acquired 408 farms measuring 2.9 million hectares at a total cost of N$1.4 billion.
However, government still needs to acquire another 2.1 million hectares to realise its resettlement target by the year 2020.