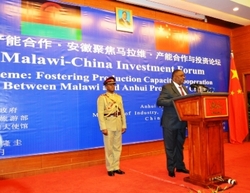 by  Gladys Kamakanda
Lilongwe, June 21, 2016: President Arthur Peter Mutharika said the coming in of Chinese investors has come at the right time when government is moving from a consuming and importing economy to a producing and exporting one.
Mutharika made the remarks Tuesday at Golden Peacock in Lilongwe during the official opening of the Malawi-China Investment Forum.
He promised the delegates that the time they have devoted to this forum will be a worthwhile investment as Malawi is becoming an investment haven of Southern Africa and assured them that they will discover Malawi to be a preferred country where they can do business.
“I encourage you to build productive partnerships with the domestic private sector. Our policy in the private sector is clear. We believe that the private sector is the driver of economic development in the country.
“We believe that foreign and domestic investment is the engine of economic development, we are focusing on developing the private sector in order to create more jobs for our people,” said Mutharika.
He assured the investors that government is set to provide security of their investment, life and property that includes flexibility in repatriation of profits without exploiting Malawi.
Mutharika therefore disclosed that Malawi is now a signatory of the Tripartite Free Trade Agreement bringing together 26 countries from the Common Market for Eastern and Southern Africa (COMESA), Eastern Africa Community (EAC) and the Southern African Development Community (SADC).
He said treaty will boost regional trade and open up investment opportunities that seemed impossible a couple of years ago, companies manufacturing locally to a certain level of local content will be able to export into this region free of duty.
During the opening, Minister of Industry, Trade and Tourism Joseph Mwanamvekha informed the investors that government is in the process of implementing reforms that are transforming various sectors.
“We are implementing policies that will encourage commercialization of farming in the agriculture sector. We are encouraging smallholder farmers to organize themselves into cooperatives to enhance their productivity and build their capacity to undertake value addition,” explained Mwanamvekha.
He said that the Malawi government is also in the process of identifying estates that are lying idle so that they are opened up for commercial farming, by the end of this exercise which is presently 54 percent complete, Malawi will have approximately 10, 000 farms available for commercial use.
Ambassador of the People’s Republic of China to Malawi, Shi-Ting Wang said of all the more than 50 countries in Africa they have chosen Malawi as a place to hold this investment forum because of the good relationship between the two countries.
He said there are lots of investment opportunities in this country; it is a country with abundant natural resources, tourism attractions and pleasant weather.
“Malawi people are peace-loving, kind and friendly. For that it is known as the ‘warm heart of Africa’, we will firmly support each other in our bilateral relations and respect the core interests of each other,” said the Ambassador.
Shi-Ting said under the leadership of President Mutharika Malawi also enjoys political stability.