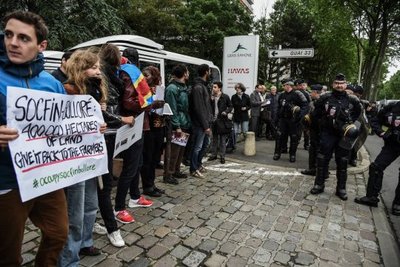 Blockades are popular these days in France. This time, it was the turn of the Bolloré group, located in Puteaux (Hauts-de-seine), to experience this form of protest. For nearly three hours on the morning of 3 June, around a hundred protesters peacefully blockaded the entrances to the headquarters of one of the country’s most powerful companies. Protestors challenged Bolloré shareholders as they attempted to enter their meeting.

Representatives from civil society organisations in France (Confédération paysanne, ReAct, Survie, etc.), as well as in Cameroon, DR Congo, Sierra Leone, Côte d'Ivoire and Cambodia, aimed to draw attention to the conditions on massive corporate plantations run by subsidiaries in which the Bolloré group holds a controlling interest. 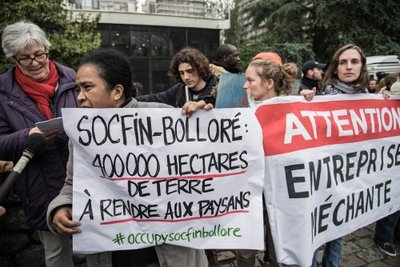 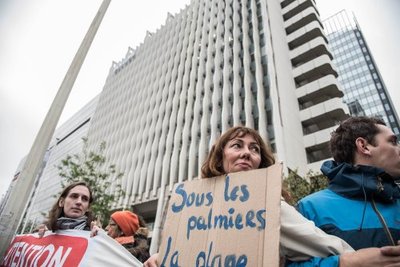 The action targeted the Luxembourg-based company Socfin, whose main shareholder is the Bolloré group, with a 39 per cent share. This holding owns or operates industrial oil palm and rubber plantations in a number of African and Asian countries. Since 2008, it has continuously expanded its reach at the cost of local people, resulting in numerous social conflicts.

"The planted area controlled by Socfin’s African companies increased from 129,658 to 185,324 hectares between 2009 and 2015, an increase of over 40 per cent. This expansion has sparked serious conflicts with local people who are displaced from their lands and see their living conditions steadily deteriorate”, said the organisation ReAct. 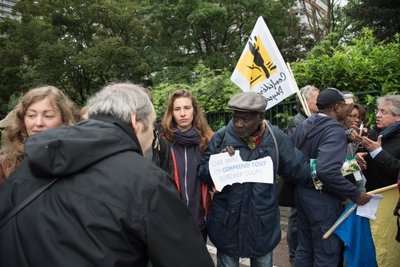 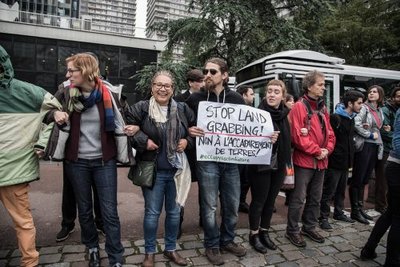 Formed on 5 June 5 2013, the International Alliance of Local Communities of Socfin-Bolloré Plantations denounces, among other things, "ruthless land grabbing, which robs local people of their vital lands and food-producing resources” and “the meagre compensation provided to local residents.”

Raphael, from Cambodia, wearing a Krama, a traditional Cambodian scarf. He speaks calmly and with determination while police and security guards try to shove him, "We are here to say that Bolloré and its subsidiaries must not dictate the law, neither in Cambodia nor in Africa." Lucien, from Congo, states angrily: "I do not understand how the Bolloré Group can make billions in profits in Africa while poverty remains widespread and people are unable to feed themselves!" 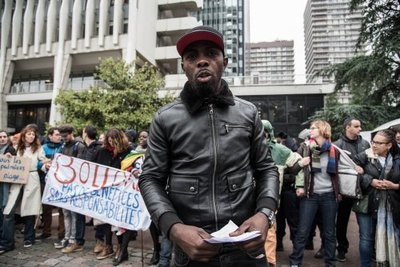 Food sovereignty in the countries where Socfin operates is one of the main concerns of the French activists who came out to support this action. A tense discussion ensued between a French farmer and a Bolloré shareholder, who hailed the “genius of the Bolloré family’s ancestors, who pioneered the marketing of rolling papers after learning the secrets of Chinese paper-making”. The farmer-activist replied, "I am a French farmer and I cannot accept that anyone would prevent other farmers from living on their own land." 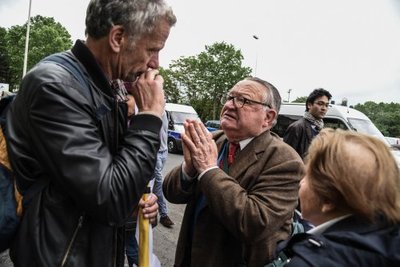 The organizations asked to meet with the leaders of the Bolloré group, but their request was denied. By late morning, security forces had intervened without violence, to help the shareholders enter their meeting. At the time of this writing, the Bolloré group has not responded to our requests for comment. A Bolloré spokesperson told AFP, however, "this event was a publicity stunt that was inappropriate because the Bolloré Group is a minority shareholder, not a manager of Socfin" (see here). The group plans to file a complaint against the protesting organisations for “theft” and "destruction of property”.