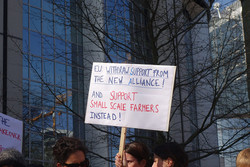 Greens | 7 June 2016
EU funding for New Alliance ignores murky world of land-grabs and human rights violations
On the face of it, the New Alliance for Food Security and Nutrition looks like an extremely worthy project: encouraging private investment in African farming to help improve food production and reduce hunger and poverty. But the noble words behind the project mask the violent and dangerous reality, as one New Alliance project in Tanzania illustrates. In effect, through their support for the G7-led project, the EU and its member states are involved in land deals by private companies that lead to human rights violations - a practice that must end, according to a new report from the European Parliament.
When the Swedish-owned firm EcoEnergy received a certificate of occupancy for about 8,000 hectares of farmland from the Tanzanian government to develop a sugar plantation and processing facility, it claimed that the investment would bring many benefits to local communities.  In reality, it led to land grabbing.
The private company received financial support from the New Alliance, a multi-billion dollar public-private partnership operating in 10 African countries, which is co-funded by the EU and bilateral donors.
In the first phases of the project in Tanzania, approximately 1,300 people – mainly farmers – were threatened with the loss of some or all of their land, or their homes. They were given no alternative to resettlement, simply offered compensation in the form of money or new land (most of which was poor quality and unsuitable for farming.  This is a clear violation of their rights.
‘Idle’ or ‘underutilised’ land
There are more cases, for instance in Malawi, of similar land deals with empty promises from companies within the framework of the New Alliance. Most follow a similar pattern: governments provide private foreign investors with land that they call 'idle' or underutilised but which in fact is often used by smallholders or pastoralist communities. Land grabbing is characterised by huge power imbalances between the ‘investor’ and the communities threatened or affected, and the accountability framework within the New Alliance is currently too weak. There is a need for more transparency and domestic complaints processes that are independent, transparent, reliable and appealable.
NGOs in Africa and Europe have been pointing to the flaws of the New Alliance over recent months, and their awareness raising and the subsequent public pressure seems to have worked in the case of the Swedish sugar project in Tanzania at least, with the government recently deciding to stop it. But more still needs to be done, especially with regard to the issue of land-grabbing and human rights violations, and the European Parliament (EP) has commissioned its own research to uncover more evidence of abusive practices. Various parliamentary committees have looked at the work of the New Alliance from a number of different angles, and on 7 June MEPs backed a report by Greens/EFA member Maria Heubuch that is extremely critical of the way the project has been dominated by corporate interests (for example through the promotion of GM crops as a ‘solution’ to Africa’s food problems despite overwhelming opposition to GMOs in Europe).
Make human rights agenda more responsive to land grabbing
“Supporting family farmers and smallholders would be the most effective way to fight hunger in many African regions. Instead, the EU contributes its scarce development funding to the New Alliance, which actually undermines sustainable small-scale food production and local food systems. The cases of land grabbing by private companies, which the EU co-funded indirectly, are unacceptable. If the New Alliance does not address the severe problems that we are witnessing, the EU should withdraw from the initiative,” said Maria Heubuch.
The Parliament is continuing to call for closer scrutiny of the New Alliance and for action on the wider issue of land-grabbing and human rights. Research commissioned by the EP’s human rights committee analyses the global land rush from a human rights perspective, and shows that the EU clearly needs to improve how it ensures compliance with human right obligations in projects that it funds. It also needs a clear policy with regards to human rights and land-grabbing. Among the proposals included in the study is a recommendation that the European Commission does more to inform the people working on development projects in Europe and in developing countries about the issue of land-grabbing and how to tackle it. The EP’s development committee has also recently chosen responses to land grabbing as one of the priority areas for its upcoming debate with EU Development Commissioner Neven Mimica.