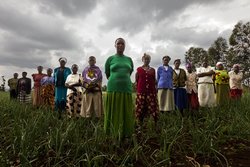 ""If the New Alliance does not address the severe problems that we witness, the EU should withdraw from the initiative", says Rapporteur Maria Heubuch, (Greens/EFA, DE).
EU Parliament | 7 June 2016

International farm projects in Sub-Saharan Africa need land grab safeguards, MEPs warn
Projects under the New Alliance for Food Security and Nutrition (NAFSN), an EU-backed G8 initiative to boost agriculture and relieve poverty by working with private companies in Sub-Saharan Africa, need to include environment protection measures and safeguards against land grabs, said MEPs in a resolution voted on Tuesday. They also called on the EU to address transparency and governance issues, to better target development goals.
MEPs stressed that some features of the NAFSN could pose a threat to farmers' rights and the environment. To target development goals better, the EU must address some deficiencies, including transparency and governance, MEPs stressed.
“Supporting family farmers and smallholders would be the most effective way to fight hunger in many African regions. Instead, the EU is contributing its scarce development funding to the New Alliance, which actually undermines sustainable small-scale food production and local food systems. As recent studies showed, there are cases of land grabbing by private companies, which the EU co-funded indirectly. If the New Alliance does not address the severe problems that we witness, the EU should withdraw from the initiative“, said rapporteur Maria Heubuch, (Greens/EFA, DE), before the vote.
Halt land grabbing
MEPs note that family farmers and smallholders have been largely excluded from negotiations, calling on private companies to create appeal mechanisms and publish publicly accessible annual reports. To protect farmers’ land rights and prevent land grabbing they want all investments to be subject to independent prior impact studies.
Restrict pesticides
The text advises against "replicating the mistakes of the Asian "Green Revolution model of the 1960s" in Africa, by ignoring the possible negative social and environmental impacts of industrialized agriculture. It stresses that given the health and environmental consequences, the NAFSN must restrict the use of chemical fertilisers and pesticides and that extensive irrigation in some areas may reduce the availability of water to small-scale farmers.
The right to seeds
MEPs stress that agricultural investment policies are meant to support the development of the local economy, so African governments should invest in local food systems to boost rural economies, ensure decent jobs and labour rights. They also highlight the need to uphold farmers’ rights to produce, exchange and sell seeds freely, as this underpins 90% of agricultural livelihoods in Africa and is vital to build resilience to climate change.
The report was passed by 577 votes to 24 with 69 abstentions.