PanEco resigns from RSPO over ‘sheer level of inaction’ 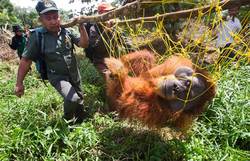 PanEco resigns from RSPO over ‘sheer level of inaction’

by Philip Jacobson
One of the Roundtable on Sustainable Palm Oil’s disgruntled NGO members officially called it quits on the organization last week, resigning over what it deemed the RSPO’s failure to reign in an industry tainted by environmental destruction and human rights abuses.
The PanEco Foundation, which is known for protecting orangutans in Indonesia, also cited “the purposeful stifling of the RSPO by its members and administration, whom for whatever reasons are increasingly allowing for it to be weakened by the day.”
PanEco was one of 33 nonprofits to have joined the RSPO, the world’s largest association for ethical palm oil production. The rest of its 2,819 members consist of planters and refiners, consumer goods manufacturers, and banks. Producer members can earn the right to market their palm oil as certified sustainable, or as CSPO, under the roundtable’s green label.
PanEco isn’t the first to be frustrated with the RSPO’s record of enforcing its standards, which ban conversion of ecologically important areas, land grabbing and labor abuse. But no NGO had ever withdrawn from the association.
In its resignation letter, Swiss-based PanEco highlighted a new RSPO resolution requiring members to “promote, and not to denigrate” the production and use of CSPO — a requirement the foundation saw as anathema to its own mission, given the questionable integrity of the RSPO’s most fundamental processes for ensuring compliance with its standards. Investigations have exposed deep flaws in the RSPO’s certification and grievance systems.
With this resolution, “we are also no longer permitted to comment that a reduction in overall consumption of palm oil is a worthy pursuit,” PanEco wrote.
Instead, “[we] are forced to blindly promote the RSPO and promote it to the public as providing a perfect service. This does nothing but silence the membership’s free speech, and censures our ability to inform the global community, who look to the NGOs as their trusted representative and the balancing force seated at a Roundtable of what is otherwise, in many cases to date, a very troubled industry.”
PanEco also cited the RSPO’s “sheer level of inaction” in addressing complaints against errant members like PT Sisirau (now PT Ibris Palm), which was found guilty of destroying Sumatran orangutan (Pongo abelii) habitat but remains an RSPO member.
Edi Suhardi, sustainability chief of palm oil producer PT Agro Harapan Lestari and a member of the RSPO’s Board of Directors, said losing PanEco was “unfortunate” because of the key role NGOs play in guiding the association.
While he thought there were “some valid reasons” for the resignation — the RSPO’s administration “tends to respond quite slowly” to issues raised by members — he said it was “unfair” to characterize the RSPO as weakened, noting that Malaysian producer IOI recently lost its certification for breaking the RSPO’s rules.
PanEco’s David Dellatore said, “We agree that there have been some positive developments, but…we not only feel that there has not been enough, but that with the history of inaction and now the active stance towards stifling concerns, that the situation is no longer tenable.”
A carbon-rich peatland planted with oil palm burns in Indonesia's Sumatra in 2015. The giant island's vast peat zones have been widely drained so as be planted with oil palm and pulpwood trees, but the dried peat is especially prone to catching fire, especially when planters use slash-and-burn to clear it cheaply. The practice is illegal in Indonesia for all except the smallest farmers, though companies routinely employ it, often with the tacit consent of corrupt officials. Photo by Rhett A. Butler/MongabayA carbon-rich peatland planted with oil palm burns in Indonesia’s Sumatra in 2015. The island’s vast peat zones have been widely drained to make way for palm oil and pulpwood, but the dried peat is especially prone to catching fire, especially when growers use slash-and-burn to clear it cheaply. Photo by Rhett A. Butler/Mongabay
Marcus Colchester, of the Forest Peoples Programme, one of the RSPO’s NGO members, said the FPP respected PanEco’s decision.
“Maybe it will remind RSPO that it should not take civil society’s engagement for granted,” he told Mongabay.
Jago Wadley, of the London-based Environmental Investigation Agency, which has dealt extensively with the RSPO’s complaints system but is not a member, puts little stock in the roundtable’s ability to guarantee sustainable palm oil production.
“We applaud PanEco for prioritizing its principles over and above the RSPO’s efforts to muzzle it, and similarly challenge the RSPO to reform in ways that promote the purpose of the organisation rather than rabidly seeking increased market share in ways that undermine its goals,” he said.