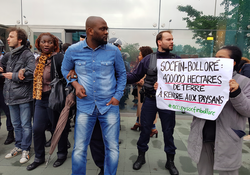 On Friday 3 June, African citizens, organisations and unions will disrupt the shareholder meeting of the Bolloré group at its headquarters in Puteaux, just outside of Paris, France. The protestors represent a movement composed of thousands of farmers who have been displaced from their lands by industrial oil palm and rubber plantations. Since Wednesday, this movement has also been occupying factories and plantations in Cameroon, Côte d’Ivoire, Liberia and Sierra Leone.

The representatives of the African diaspora—who will gather on 3 June at 9:00am at Bolloré Tower, 21-32 quai de Dion Bouton in Puteaux—come bearing the following message: "Since we no longer have access to our lands, we will prevent you from accessing your meeting”. The protestors have organised a sit-in and a non-violent blockade to stop the shareholders’ meeting from taking place. They also demand that Vincent Bolloré explain why the company Socfin (of which Bolloré owns a 38.7% share) has failed to comply with 2013 and 2014 commitments intended to resolve conflicts between local communities and Socfin plantations. Bolloré, who is also the head of the Paris-based media company Vivendi, will face a broad coalition including African organisations, NGOs, the French farmers’ union Confédération Paysanne and the activist group Attac. Parallel to this action in France, affected communities will carry out demonstrations and blockades at the facilities of Socfin subsidiaries in West Africa: Socapalm in Cameroon, SOGB in Côte d’Ivoire, LAC in Liberia and SAC in Sierra Leone.

Since 2008, these plantations have been continuously expanding. Socfin’s plantations in African countries (RDC, Liberia, Côte d’Ivoire, Sierra Leone and Nigeria) have increased from 87,303 ha in 2011 to 108,465 ha in 2014—a 24% increase that has occurred largely at the expense of local communities. In light of the response of local Socfin managers—who routinely refuse to acknowledge their associations, preferring to deal only with public authorities—affected communities founded the “International alliance of local communities of the Socfin Bolloré plantations” (Alliance internationale des communautés riveraines des plantations Socfin Bolloré) with support from the French NGO ReAct. The Alliance demands that Bolloré push Socfin to engage in a dialogue to return land to local communities and respect their right to compensation, healthcare, water and electricity.

Vincent Bolloré opened the door to dialogue, but then abruptly closed it. He justifies his actions by virtue of his "status as a minority shareholder, not manager". In a letter to the Alliance dated 4 April, he explains that Socfin “is a responsible company”; that he has “full confidence” in its leaders; and that "there has been increasing dialogue since 2015 (...) and many concrete actions for the benefit of local people”. However, local communities respond: “your stated confidence in the company is based solely on your own [unsubstantiated] claims. You cannot reap profits from Socfin and deny your responsibility for the suffering experienced by thousands of people affected by Socfin’s industrial plantations”. Indeed, large banners on display at the Bolloré tower on Friday will read: “Bolloré and Socfin: profit without responsibility?”

Emmanuel Elong, leader of the Union of Local Farmers in Cameroon (Synaparcam), stated: “Vincent Bolloré embodies predatory and irresponsible capitalism. He has no respect for the promises he has made; he makes widespread investments and then denies his responsibility to the people affected by those investments. Furthermore, we fear that his recent takeover of [French television channel] Canal+ and other French media will stifle voices like ours, which challenge his practices.”