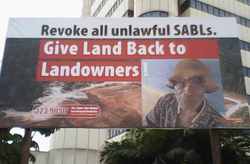 PNG government called to cancel controversial land deal
An NGO in Papua New Guinea says the government is not willing to cancel a controversial land lease despite recommendations by a Commission of Inquiry.
A new online petition launched by the NGO Act Now calling on the government to cancel the Special Agricultural and Business Land leases has collected more than 1,000 signatures in just two weeks.
The petition also includes a call for the treasurer to launch an urgent investigation into the logging industry and its tax record.
Despite reports showing most logging companies declaring losses year-after-year, logging operations have continued to expand and the country is now the world's largest exporter of tropical timber.
Campaign coordinator, Eddie Tanago, said the situation was a nightmare.
"It's just compounding on the companies not paying taxes and then you have the government not acting on the Commission of Inquiry,." he said.
"It just goes to show, the government is not willing to act on such important issues."