Brazil to lift limits on foreigners' owning of land 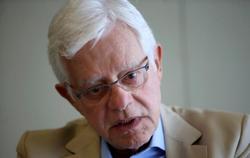 Brazilian Secretary of Investment Moreira Franco attends an interview with Reuters in Brasilia, Brazil, May 25, 2016. (Photo: REUTERS/Adriano Machado)
Reuters | 25 May 2016

Brazil to lift limits on foreigners' owning of land

By Lisandra Paraguassu
Brazil's government plans to lift current limits on foreign ownership of agricultural land, Secretary of Investment Moreira Franco, the person behind privatization for the new administration, told Reuters on Wednesday.
Franco called the restriction on sales of agricultural land to foreign individuals and companies "nonsense" and said interim President Michel Temer will reconsider the issue.
The restriction was adopted in 2010 by former President Luiz Inacio Lula da Silva.
"The government will discuss the issue, see how it can solve this. It is something completely unreasonable," said Franco.
Lula's administration was concerned at that time that countries such as China could take control of large segments of arable land in Brazil.
Rules overseeing deals were changed to limit the amount of land foreign investors could buy. Formalities with documentation were increased, making deals much more complex.
But without foreign lenders able to receive land as collateral if local borrowers defaulted, the restrictions began to limit international credit, especially in the agricultural sector.
Companies in Brazil's commodities sector have long defended a review of the rules, to allow for more investment to flow into the country, especially in the timber industry.
Pulp and sugar industries are among those defending the end of restrictions.
Moreira Franco also spoke to Reuters about the financially distressed, federal power holding company Centrais Elétricas Brasileiras SA (ELET6.SA), or Eletrobras.
He said the government is still evaluating what actions to take regarding the company's financial woes, but confirmed Eletrobras plans to sell some assets such as its power distribution subsidiaries.
"We will have to find a solution for Eletrobras," he said.
The company has not posted an annual profit since 2012 and is asking for at least 32 billion reais from the government as compensation for the early renewal of operating licenses in 2013 that sharply reduced its revenues.
Moreira Franco did not want to define possible rates of return over investment in projects Brazil intends to auction off to private investors.
But he said the government has no intention of continuing to subsidize credit lines provided by development bank BNDES, thus reversing policies of the previous administration of suspended President Dilma Rousseff.
"The government has no conditions to do that. It is not a question of my or the government's desire, it's just the reality," he said.