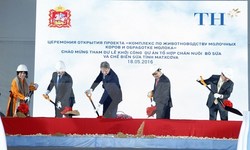 Vietnamese, Thai firms to pour $4 bln into Russian dairy production
Asian businesses plan to invest around $4 billion in milk and dairy production in Russia, helping Moscow replace imports hit by trade sanctions on traditional suppliers.
Russia banned many Western food imports, including dairy, in 2014 in retaliation for sanctions over Ukraine, creating supply shortfalls and spurring investments in its agricultural sector.
Vietnamese dairy producer TH Group began building milk farms in the Moscow region on Wednesday as part of a 10-year project worth $2.7 billion.
Separately, the state-backed Russia Direct Investment Fund (RDIF) announced plans on Wednesday to sign an agreement with Thailand's Charoen Pokphand Group (CP Group) on joint investments in the construction of a $1 billion milk and dairy complex in the Ryazan region of Russia.
"It's not the easiest time for our country. We live in conditions of food sanctions and when the Vietnamese government supports us, it means a lot to us," Alexander Tkachev, Russian agriculture minister, said at a ceremony marking the start of construction of TH Group's farms.
The first stage, worth $500 million, will lead to the production of 800 tonnes of milk and products a day that are expected to reach the Russian market next year, said TH Group Chairman Thai Huong.
CP Group and RDIF did not immediately provide details of their project.

RT | 18 May 2016
Thai & Chinese investors to build $1bn dairy plant in Russia
Thailand's largest agribusiness Charoen Pokphand Group (CP) and China’s Banner Dairy are to spend $1 billion building a diary in the Russian city of Ryazan. The facility intends to produce 400 thousand tons of milk products annually.
The Russian Direct Investment Fund will reportedly seal the deal with the foreign investors on the sidelines of the Thai-Russian Business Dialogue forum in Saint Petersburg.
The plant will include dairy farms with 80,000 milking cows and 40,000–60,000 hectares of grain, as well as a feed factory, the head of the Russian Direct Investment Fund Kirill Dmitriev told Vedomosti daily.
The project is expected to be up and running within 3-5 years and would be the biggest raw milk producer in Russia with a capacity of 300,000–350,000 tons a year. The CP Group will run the enterprise.
Last year, the Thai conglomerate said it was looking to invest $600 million in meat and milk production in Russia, and was examining opportunities in several Russian regions.


TH True Milk kicks off dairy project in Russia
Moscow (VNA) – The Vietnamese dairy firm TH True Milk began the first phase of its large-scale cow breeding and farming project in Moscow, Russia on May 18.
According to the group’s Chairwoman Thai Huong, Russia is the first offshore investment destination of the firm.
TH True Milk has set a budget of 2.7 billion USD for a ten-year investment in the three-phase project, of which 500 million USD has been earmarked for the first phase.
Dairy products from the project are expected to debut in mid-2017.
In the last phase, the company will expand its herd to 350,000 cows farmed on 140,000 hectares of land and be capable of processing 5,900 tonnes of milk on a daily basis.
It also plans to run a distribution network of 300 stores across the country.
Attending a ceremony marking the start of the project, visiting Prime Minister Nguyen Xuan Phuc said Russia is a large and potential market for dairy products.
He stressed the free trade agreement signed last year between Vietnam and the Eurasian Economic Union will facilitate and stimulate cooperation in the sector.
The dairy project will create jobs and contribute to local agricultural development, he added, hoping that it will represent a diverse and effective partnership between Vietnam and Russia.
The PM said Vietnam’s Government will continue giving maximum support for the project.
Moscow Governor Andrey Vorobiev said he welcomed TH True Milk’s operations and lauded the firm’s efforts to launch the project on the agreed schedule.
He expressed his confidence in the project, which he believed will become an example for farming collaboration between the two countries’ enterprises and localities.
He vowed to create favourable conditions for the implementation of all Vietnamese projects in his region.
Previously, TH True Milk took part in an international food exposition in Russia, winning seven awards and a warm welcome from local consumers. The company broke a record by the India-based Asian Record Organisation to become the top Asian large-scale and high-tech dairy farm in 2015.
Vietnam has so far channeled 2.93 billion USD into 20 projects in Russia, mostly in the sectors of oil and gas exploration and services. Meanwhile, Russia has been ranked 17th out of 112 nations investing in Vietnam with 114 projects worth 2.08 billion USD.-VNA