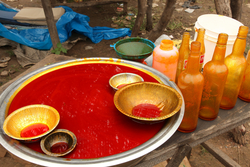 A new video shows how rural women in West Africa are working to protect traditional palm oil production in the face of land grabbing by industrial oil palm plantations.

In the last century, industrial oil palm plantations expanded around the world, first in Asia, then in Latin America. The development of high-yielding oil palms and new processing techniques—which transformed the traditionally viscous red liquid into a colourless, odourless oil suitable for global markets—made oil palm plantations a lucrative investment. In recent years, the expansion has targeted Africa with a vengeance. And numerous campaigns and advocacy efforts have highlighted its negative impacts, including deforestation, displacement of communities, deplorable working conditions, the expansion of monocultures, the erosion of biodiversity and climate change.

But there is another side of the palm oil story—one that begins in West and Central Africa, where peasants practice agroecology, harvest palm fruit from small farms and wild groves, and process it for local consumption as they have for generations. Oil palm originates in this part of the world, and was only introduced to Asia and Latin America as a plantation crop in the twentieth century. In its centre of origin, the crop remains a vital part of local culture, livelihoods and cuisine, and its artisanal production is controlled primarily by rural women.

This video provides a window onto the reality of women-led artisanal palm oil production, a reality often rendered invisible in narratives of global industrial palm oil. This model is under threat by the rapid advance of industrial plantations, free trade agreements and corporate-controlled value chains at the expense of community-based food systems.

(To activate the English subtitles in the video below, click on "CC" at the bottom-right.)