Karuturi boss laughs off sale of his flower farm, calls the business ‘air’ 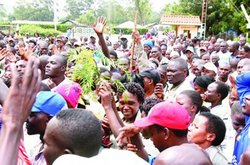 Karuturi flower farm workers demonstrate in Naivasha over unpaid salaries in October 2014. The company was placed under receivership in February 2014, with its liquidation kicking off last week Friday. (Photo: Standard)
Standard | 10 May 2016
Karuturi boss laughs off sale of his flower farm, calls the business ‘air’
By Moses Michira
Ramakrishna Karuturi has mocked plans to sell off his Naivasha-based flower farm.
This could turn out to be a disappointing anti-climax for creditors, who include CFC Stanbic Bank, which moved to court forcing the receivership of the farm, and which has now led to liquidation.
“I am hoping they [liquidators] can find someone to buy air,” Mr Karuturi told The Standard, adding, “there is nothing in there to be sold.”
In this statement, the 51-year-old founder and managing director believes there is not much left of the company.
Its main assets, according to financial reports, are flower bushes and the greenhouses they are grown in.
Draw value
Most of the greenhouses are not in the best shape, considering the financial troubles the firm has had that pushed it into receivership more than two years ago.
It would be difficult to draw any value from the flower bushes without the land, Karuturi said, laughing off the liquidation process that kicked off last week Friday.
The company owes CfC Stanbic about Sh383 million, making it the single-largest creditor and the biggest beneficiary in the intended liquidation to be executed by PricewaterhouseCoopers (PwC).
Another creditor whose debts are unsettled is All Pack Industries Ltd, a Nairobi-based packaging firm.
Karuturi Ltd was once the largest rose grower in the world, producing flowers on vast land on the shores of Lake Naivasha.
The land and some of the agricultural equipment, however, belong to its sister firms Surya Holdings and Rhea Holdings — both 100 per cent owned subsidiaries of Mumbai-listed Karuturi Global.
Several creditors are hoping the disposal of Karuturi’s assets, through the liquidation process, would offer them some recourse and settle debts that have been outstanding for years.
But the ‘smart’ company structure Karuturi has may see the owners of the flower firm suffer minimal exposure.


The firm was, however, able to negotiate with KRA to slash its tax bill from more than Sh2 billion to below Sh500 million.
Liquidation order
But it all came to a head on Friday last week when more than 2,600 workers of the troubled flower grower were asked to leave the premises and their company-provided staff houses.
The receiver managers told the employees in a meeting on Thursday that the company would be liquidated, and as such, their employment was effectively over.
“We regret to inform you that the company will cease its trading activities on Friday, May 6, 2016, following the winding up order,” receiver and interim liquidator Muniu Thoithi told the workers on Thursday evening.
Karuturi was placed under receivership in February 2014 after encountering trouble in servicing its debts.
Ian Small and Kieran Day were appointed interim receiver managers, before PwC took over last October.
The receiver managers were, however, unable to return the firm to profitability and carry on with business in a sustainable way.
“Following a winding up order, a company can only operate or carry on its business in so far as may be necessary for the beneficial winding up thereof, and with permission of the court. As such, the closure of the operations is the inevitable consequence of the order,” Mr Thoithi said.
Thoithi is working with PwC boss Kuria Muchiru to find a buyer for the business, following the winding up order issued by the liquidation court on March 30.
Through its sister companies, the flower grower has in the past been accused by the Kenya Revenue Authority (KRA) of dodging taxes through the abuse of transfer pricing guidelines. In essence, Karuturi Ltd was a tenant of its sister companies, which in law exist as independent entities.