Sino-Russian agricultural fund projects to be presented at EEF — minister 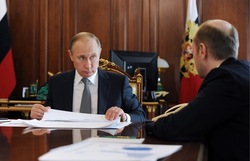 Sino-Russian agricultural fund projects to be presented at EEF — minister
MOSCOW, May 4. /TASS/. First projects financed by the Sino-Russian agricultural fund will be presented at the Eastern Economic Forum in Vladivostok on September 2-3, Russia’s Far East Development Minister Alexander Galushka said on Wednesday at the meeting with President Vladimir Putin. "The Fund will go live on June 1. We intend to show major agricultural projects financed by that Fund at the Eastern Economic Forum," the Minister said.
The shareholders agreement to set up the Sino-Russian agricultural fund in Russia’s Far East was signed with China, the Minister said. "Investments of this Fund will be up to 650 bln rubles ($9.8 bln). They [the Chinese partners - TASS] will provide 90% of funding; 10% will be given by our Far East Development Fund," Galushka said.

"51% in the management company is held by the Russian Federation and 49% - by Chinese partners. Land can only be provided to Russian companies for agricultural production. Russian citizens should also total at least 80% of the workforce," the Minister said. "Engagement of foreigners is allowed but not above 20%; this is also stipulated. The priority is given to Russian suppliers of agricultural machinery and equipment to implement agricultural projects in the Far East," Galushka said.
The agreement also stipulates creation of conditions for localization of Russian manufacturers in the Far East, he added.