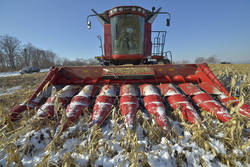 "Our main priority in the Far East is to provide the conditions for investment in agricultural and infrastructure spheres," says Russian Agriculture Minister Alexander Tkachev, naming several regions near China's northeast.
Xinhua | 4 May 2016

Interview: Russia eyes enhanced agricultural cooperation with China
MOSCOW, May 4 (Xinhua) -- Russia hopes to strengthen agricultural cooperation with China, Russian Agriculture Minister Alexander Tkachev said in a recent interview with Xinhua.
"The trade volume in the agricultural sphere between Russia and China has been increasing during the past years, and in 2015 the figure hit 3 billion U.S. dollars," Tkachev told Xinhua on Monday.
The agricultural development in Russia has demonstrated a strong dynamic with the firm state support and various development projects. And Russia's export of corn, soybean, sunflower oil and flour to China has all increased in recent years, according to the official.
Implementing the Far East development program, for instance, is the Russian government's priority task to increase the country's investment attractiveness, said Tkachev.
"Our main priority in the Far East is to provide the conditions for investment in agricultural and infrastructure spheres," Tkachev said, naming several regions such as Primorsky, Khabarovsk, Amur and Sakhalin, which border with or are in the vicinity of China's northeast.
Those regions have the potential to increase agricultural production, if the government funds the restoration and modernization of agricultural infrastructure in the Far Eastern regions to stimulate investment and to support farmers, Tkachev said.
While domestic policies would help speed up the development of the Far East, Tkachev hoped investors could "produce a strong synergetic effect."
Russia would like to boost mutual agricultural trade with China, as well as agricultural products' accessibility to each other's markets, said Tkachev.
Tkachev told Xinhua the implementation of joint investment projects under multilevel Russian-Chinese commissions on agriculture would be discussed during his working visit to China, which started Tuesday.
Meanwhile, Tkachev said he will discuss the safety of agricultural products during his meetings with Chinese officials.