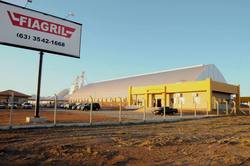 Chinese firm said to take control of Brazilian soybean exporter
by Gerson Freitas Jr
China is so hungry for soybeans it’s said to have taken a major foray into expanding its control over supplies from Brazil, the world’s top exporter.
A unit of China’s Shanghai Pengxin Group Co. bought a controlling stake in Brazil’s soybean trader and biodiesel maker Fiagril Ltda for $286 million, said a person with direct knowledge of the matter, who asked not to be identified because the details of the deal haven’t been published. The deal would be the first major Chinese acquisition of an agricultural company in Brazil.
Growing Chinese appetite for meat has spurred increasing demand for the oilseed, which is crushed into meal for livestock feed. Soybeans are also turned into cooking oil and biofuel. China, the largest pork-eating country, is the world’s biggest buyer of the commodity and the nation’s imports have tripled since 2005. Prices have jumped 21 percent this year as unfavorable weather threatened South American supplies.
The Shanghai Pengxin unit, Hunan Dakang Pasture Farming Co Ltd., bought a 57 percent stake in Fiagril for about 1 billion reais ($286 million), the person said. Fiagril, a unit of Fiagril Participacoes SA, confirmed the acquisition of an undisclosed stake by Hunan Dakang in a statement without providing further details. A press officer declined to comment on the value of the deal as well on the size of the stake.
Biggest Purchase
Privately-held Shanghai Pengxin’s purchase is the biggest of a Brazilian agricultural company by a Chinese firm, data compiled by Bloomberg show. In 2014, Cofco Corp., China’s largest food company, got access to soybean-trading assets in Brazil through the acquisition of controlling stakes in Dutch grains trader Nidera BV and Singapore-based Noble Group Ltd.’s grains and oilseed unit. In December, Cofco bought the remaining stake in Noble’s agricultural unit.
Brazil accounts for about 45 percent of the global soybean trade. Production in the South America’s nation almost doubled over the past decade as growers raced to keep up with soaring demand from China. Almost 78 percent of Brazil’s soybean shipments went to the Asian country in 2015.
Fiagril, which was founded in 1989, moves about 2.5 million metric tons of soybeans and corn a year and has a storage capacity of 700,000 tons, according to the Lucas do Rio Verde, Matto Grosso-based company’s website. The company also owns a biodiesel plant with capacity to produce 200 million liters (53 million gallons).
Fiagril Participacoes and private-equity firm Amerra Capital Management will remain shareholders in the soybean-trading unit. The deal with Hunan Dakang doesn’t involve Fiagril Participacoes’s stake in shipping, ethanol and seed-production businesses.