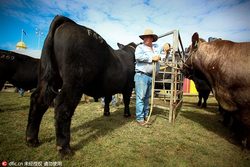 by Angus Whitley
A Chinese-led group dropped its A$371 million ($281 million) offer for Australia’s most iconic cattle ranch after opposition from the government weeks before a general election.
The suitors led by Shanghai Pengxin Group will instead work on a new structure for the takeover of S. Kidman & Co., while sticking with the same price tag for the 117-year-old cattle company, according to a statement Tuesday
Treasurer Scott Morrison said last week he was concerned the acquisition of Australia’s largest private landowner was against the national interest. With elections looming in July, he said he also had to gauge the public reaction to a deal of this scale. The suitors gave themselves three months to come up with a solution that could appease Morrison.
Morrison had said he was concerned that Kidman, which is being sold almost in its entirety, wasn’t affordable for Australian buyers. The group said Tuesday they wouldn’t break the target up under any new agreement. Under the scrapped offer, local investment group Australian Rural Capital Ltd. was set to buy 20 percent of the company.
In a separate statement, Kidman said that Morrison had left the company and its suitors little choice but to scrap their agreement. The treasurer had given them four days to respond to his objections. The cattle company said it was already 34 percent foreign owned.